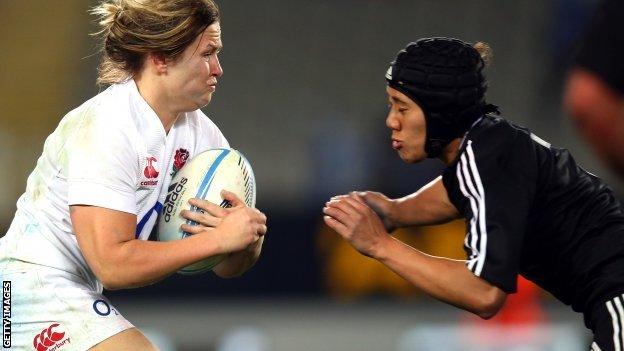 England Women remain without a win in New Zealand since 2001 after losing 29-10 in the first Test of the three-match series at Auckland's Eden Park.

Portia Woodman's try helped put the hosts 8-0 up before Marlie Packer responded to make it 8-7 at half-time.

But Kelly Brazier kicked 14 points and Amiria Rule and Justine Lavea scored a try apiece in the last six minutes to settle the 1,000th women's Test.

"We are disappointed because we let it slip," said England coach Gary Street.

"At the end of the first half we grew in confidence but, come the restart, we lost our way.

"We started missing tackles whilst the Black Ferns took their opportunities.

"We'll have a look at the footage, analyse it well and make sure we learn from it for our next game on Tuesday.

"We have certainly got to improve our accuracy with the ball at the breakdown and make sure we don't give the referee so many chances to penalise us."

England went into the match on the back of five wins and a draw in their last six games against New Zealand, winning their previous two series on home soil in 2011 and 2012.

The first women's Test was played between the Netherlands and France in Utrecht in 1982 to mark the Dutch Rugby Union's 50th anniversary. France won 4-0.

However, England lost both Tests the last time they toured the country in 2005 and have now won only one of their six Tests on New Zealand soil.

Brazier kicked a penalty to put New Zealand ahead before Woodman marked her debut with a try.

Packer went over from a scrum after Katy McLean's missed penalty was knocked on by Casey Robertson, and Emily Scarratt added the conversion to make it 8-7 at the break.

England's attacks were ruined by poor handling after the break, while Brazier kicked a couple of penalties to extend the Black Ferns' lead before Lavea and Rule sealed victory.

The second Test will take place in Waikato on Tuesday before the series climax in Pukekohe next Saturday.