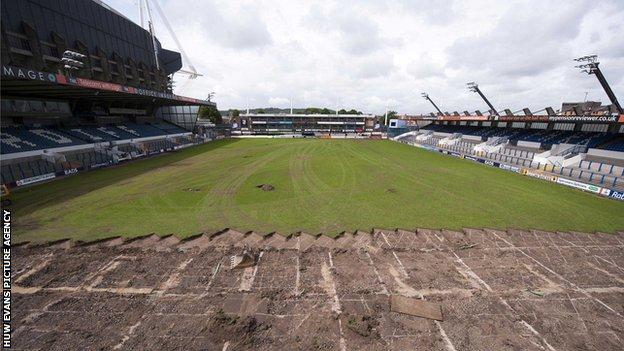 Cardiff Blues are hopeful of staging the Amlin Challenge Cup final as part of a bid that will see the Millennium Stadium host the Heineken Cup in 2014.

European Rugby Cup and the Welsh Rugby Union have called a press conference for Wednesday which is expected to confirm a successful Welsh bid.

That could see the Arms Park, host the Amlin.

"We're part of that bid in terms of the Arms Park hosting the Amlin final," said Blues chief Richard Holland.

"That will be a huge tick in the box if we're able to be successful in that bid, but we'll watch this space, leave the decision to ERC and the guys next door at the Union who are working hard on behalf of Welsh rugby."

The WRU in June after the French Rugby Federation withdrew from staging the matches in Paris.

The French decision to withdraw from staging both finals in 2014 was the result of uncertainty over the availability of the Stade de France.

That opened the door to bids from Wales and England, with Cardiff now seemingly set to host the Heineken Cup final for a seventh time.

The last time the Millennium Stadium hosted the Heineken Cup final, in 2011, it was the Cardiff City Stadium that housed the second tier Amlin final.

The Blues ground-shared with Cardiff City Football Club at the Cardiff City Stadium for three season, before for the 2012-13 season.

The move back to the 12,500-capacity Arms Park (which can be raised to almost 15,000 by installing temporary seating) has proved a success with crowds rising last season, but there were continuing concerns over the boggy state of the pitch.

That has been addressed by installing a state-of-the-art artificial playing surface at an estimated cost of £400,000 and hosting the Amlin would put the pitch in the shop window, as well as generating potential profits of £50,000-£100,000.

"It's IRB [International Rugby Board] approved and Saracens have led the way and we're the second to follow suit," Blues chief executive Holland said.

"If we are successful in our bid to host the Amlin that will be big kudos for the pitch, but also an endorsement from the European governing body would be a huge thing for us here at Cardiff Arms Park.

"It's 2013 and I see this as the future of rugby surfaces and I would expect other clubs and potentially national grounds to follow suit.

"Myself and the board have taken the decision to install this product and we're excited about the future here."

The Blues took part in the first professional rugby match to be played on Saracens' artificial pitch at Allianz Park in January 2013, and the region's management were impressed with the surface.

The new pitch will allow the Blues' age-group teams, Cardiff RFC and the Cardiff University rugby side to train regularly at the Arms Park, something that was impossible in the past as the natural grass surface had to be used sparingly.

Laying of the new surface is a week ahead of schedule and the Blues expect to christen the pitch in a pre-season friendly against Sale Sharks on Friday, 23 August.