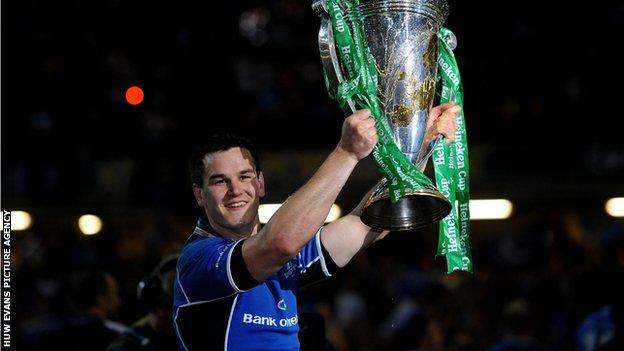 Cardiff will host European rugby's showpiece weekend for a record seventh time when the Millennium Stadium stages the Heineken Cup final in 2014.

The Heineken Cup final is on Saturday, 24 May, while the Amlin Challenge Cup final is at Cardiff Arms Park on Friday, 23 May.

"It is a feast of rugby for Wales at the end of May next year," said Lewis.

Cardiff has staged the Heineken Cup final on six previous occasions, including the very first final at the old National Stadium in 1996.

WRU chief Lewis confirmed to the BBC in June his intention to bid for the final after the French Rugby Federation withdrew from staging the final in Paris.

The French decision to withdraw from holding both finals in 2014 is the result of uncertainty over the availability of Stade de France.

"I am absolutely delighted to announce that the WRU has been successful in its bid to host the 2014 European Rugby Cup final at the Millennium Stadium," said Lewis.

"For all the fans in Wales we are going to have the very best of club rugby here in Wales in 2014 coming to Cardiff for a record seventh time.

"It's a double win for Wales because not only will we have the Heineken Cup, but Cardiff Arms Park will host the Amlin Challenge Cup final."

The Millennium Stadium last hosted the Heineken Cup final when Leinster beat Northampton Saints 33-22 to lift the Trophy for the second time back in 2011.