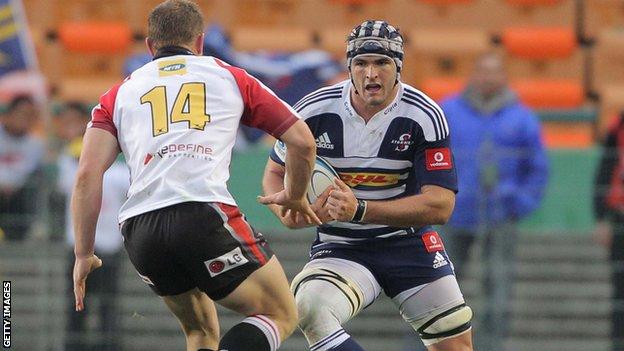 Exeter Chiefs have completed the signing of versatile forward Don Armand from South African Super 15 side Western Stormers on a two-year-deal.

The 24-year-old started for Western Province in their 2012 Currie Cup final win, but struggled to find regular first-team action at the Stormers.

Armand can cover any of the back row positions, as well as the second row.

Coming to England is a new challenge for me, but it's one I am definitely looking forward to

"I'm very excited by the challenge that lies ahead. The lads look a great bunch," Armand told the Chiefs website.

"The club is very professional, the stadium is great and although I've not met the fans yet, I've been on Twitter and they have all been so welcoming. It's already amazing and everybody has made me feel very welcome.

"The more I look at the games and the more I ask people about the club and the area, the better it feels."

Chiefs locks Tom Hayes and James Hanks are currently recovering from a back operation and broken collarbone respectively and Armand's versatility could be invaluable in the new Premiership campaign, which starts in September.

"Coming to England is a new challenge for me, but it's one I am definitely looking forward to," he added.

"When I spoke to (head coach) Rob Baxter I had a great chat with him and he told me so much about the club and where it wanted to go.

"I also asked other people about the Chiefs and they could only tell me good things, so for me there were so many positives and I just wanted to be involved."