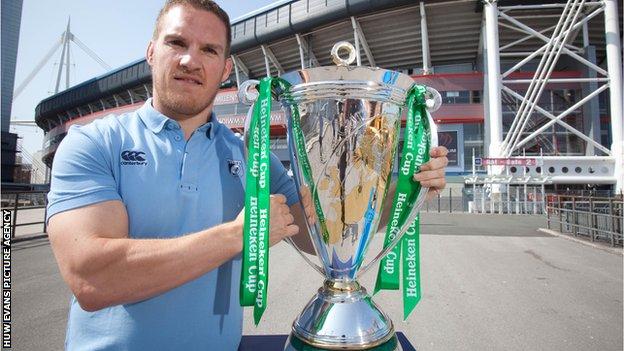 Gethin Jenkins says his desire to play for Wales was behind his decision to leave France and return to the Cardiff Blues.

He left Heineken Cup winners Toulon after only a year to return home this summer.

Jenkins says a lack of games in France had an impact on his Wales career.

"I thought I needed to make a change because I wanted to play for my country and that was really important to me," said Jenkins.

"I wasn't playing the rugby I was used to or as many games, and that takes it's toll on you.

"I had a year away and it was a good experience, but now I am looking forward to being back to where I have been for eight years.

"After the Autumn, when I hadn't played too much rugby for Toulon, I found I was off the pace at international level."

The Wales and Lions prop joined the exodus of Welsh talent when he agreed to join the star-studded Toulon squad from the Blues at the end of the 2012 season.

But Jenkins, 32, struggled to hold down a first-team place and made the decision to return to the Blues a year later in a bid to boost his Wales career.

The 98-times capped loose-head prop lost his place during the 2012 Autumn Test series to rival Paul James but returned to the starting line-up against Australia in December after the former Ospreys was recalled back to his club Bath.

He went on to make four appearances in Wales' successful defence of the Six Nations title, captaining the team in the 30-3 win over England in the championship decider.

Jenkins claims his return was based on how international players are managed here and by his belief that the Wales coaches pay closer attention to a player's performance when they play for a Welsh region.

"You get managed," Jenkins.

"The whole system is inter-linked, that boosts your chances and you are playing in Wales and you get seen a lot more."

Welsh rugby has seen a raft of international stars head for pastures new in England and France, with centre Jamie Roberts and flanker Dan Lydiate both signing for Racing Metro in Paris, while George North has moved to Northampton Saints.

Jenkins was reluctant to offer any advice to Welsh players who are considering moving to England or France.

"It is an individual decision," said Jenkins.

"Sometimes it is good for you and sometimes it's not."

Jenkins was selected for his third British and Irish Lions tour in May but did not play a game and was forced to return home early after he aggravated a long-standing calf problem.

But he says he is now fit and ready to start for the Cardiff Blues and will join the rest of coach Phil Davies squad on Monday.

"I came back from the Lions with an injury but have done the rehab and that is out of the way. I had a break and I am looking forward to getting back into it," said Jenkins.