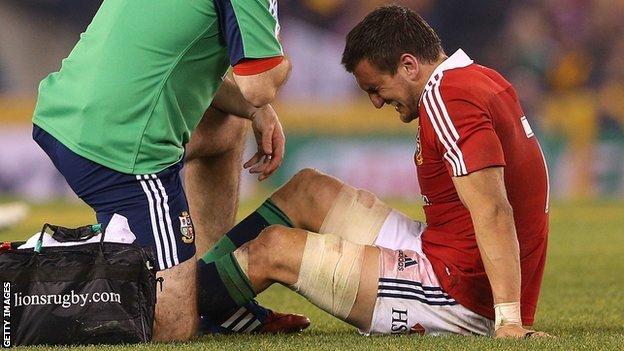 British and Irish Lions captain Sam Warburton will be out of action for three to four months because of his hamstring injury.

The Wales and Cardiff Blues flanker, 24, suffered the injury in the second Test of the Lions tour of Australia.

"He therefore does not need surgery but will require a period of rehabilitation between 12 to 16 weeks from the date of the injury," added Miles.

"His rehabilitation will focus on range of motion, flexibility and specific strengthening of the hamstring in order for him to return to full health."

Warburton sustained the injury during the second half of the Lions' second-Test defeat against the Wallabies in Melbourne on 29 June.

He subsequently missed the final Test in Sydney, which the Lions won 41-16 to clinch the series 2-1.

The flanker will now miss the start of the Blues' Pro12 campaign and is a doubt for the early rounds of the Heineken Cup pool stages.

But Warburton is expected to be fit for Wales' autumn Tests at the Millennium Stadium in November.

Warburton travelled to Australia nursing a knee injury that saw the open-side flanker sit out the warm-up match against the Barbarians in Hong Kong.

The previous year, his participation in Wales' tour to Australia had been in doubt after injuring a shoulder against France in the 2012 Six Nations in March.

A shoulder "stinger" suffered against Ireland also ruled Warburton out of the second round of the 2013 Six Nations away to France.

Warburton would have been unlikely to feature in the start of the Pro12 - which normally kicks off at the start of September - in common with other Lions players who will undergo a period of enforced rest.