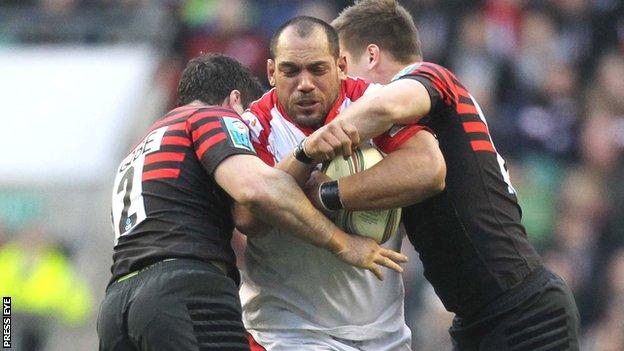 Ulster face a tough start to their 2013/14 Heineken Cup campaign with a Ravenhill clash against Leicester Tigers on Friday, 11 October.

Mark Anscombe's team visit Montpellier in Pool 5 on 19 October followed by games against Treviso at home on 7 December and in Italy a week later.

Ulster finish against Montpellier and the Tigers in January.

Leinster open away to the Ospreys with Munster at Edinburgh and Connacht host Saracens, last season's runners-up.

Saracens ended Ulster's hopes of Heineken Cup success in April with a 27-16 win at Twickenham in the quarter-finals.

English Premiership winners Leicester will provide a difficult opener for Ulster although home advantage could be a crucial for the Irish team.

French side Montpellier and improving Italian outfit Treviso will also provide stern tests for the 2012 runners-up.

Dates and kick-off times for the final two pool games have yet to be confirmed.

Ulster director of rugby David Humphreys said his team had been handed a "tough pool" after the draw was made last month.

"The challenge of facing Leicester is highlighted by their recent performances in becoming Aviva Premiership winners, while Montpellier and Treviso have become increasingly competitive in their respective domestic leagues but also in Europe," added Humphreys.