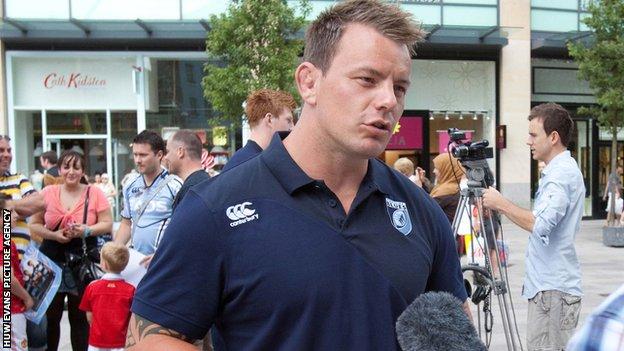 Hooker Matthew Rees says the Cardiff Blues will be challenging for silverware in the 2013/14 season.

Rees left the Scarlets after nine years this summer and signed a two-year contract with the Blues.

He and prop Gethin Jenkins are the only new Blues signings, while centre Jamie Roberts has left for France.

"We just need to take it to another level and I think we will be challenging for silverware next year," said Rees.

We have to kick on from last season, we played some great rugby but lost a lot of games by five to seven points

There have also been changes in the Blues coaching set-up with former defence coach Xavier Rush leaving and former hooker Andy Kyriacou appointed as forwards coach, while Dale McIntosh and Mark Ring have been drafted in to take weekly coaching sessions.

The Blues finished ninth in last season's Pro12 and have failed to reach the tournament's play-offs since they were introduced back in 2010.

Rees is confident the region can be competitive and will be in the mix for the play-offs at the end of the new campaign.

"We have to kick on from last season, we played some great rugby but lost a lot of games by five to seven points," said Rees.

"There were a lot of inexperienced players at the beginning of the last season, but they ended up playing a lot of rugby.

"They need to pick up certain aspects of the game and put them right.

"There are a couple of old heads here now and hopefully we can steady the ship, but we also have players who have gained international honours in the summer.

"We have a lot of boys back who toured Japan with Wales and that raises the bar again."

Blues lock Bradley Davies captained Wales on their summer tour to Japan, where they lost the second and final Test to the Brave Blossoms. He was one of eight Blues players in coach Robin McBryde's 27-man Wales squad.