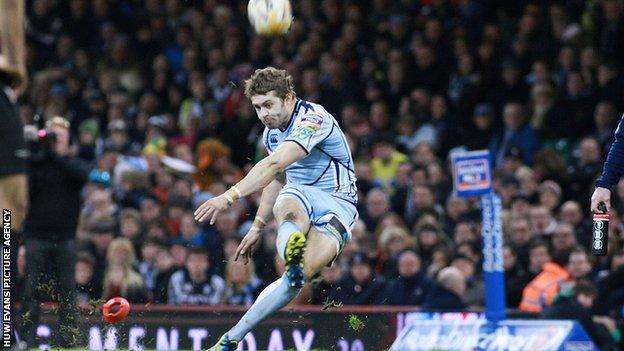 The player's future has been the subject of speculation since he starred for the British and Irish Lions in their 2-1 series win over Australia.

The Paris-based club were among those claimed to have made an approach.

However, a statement on their website said: "Racing Metro 92 through its president Jacky Lorenzetti wishes to deny this."

However, the club say they have not met with Halfpenny or his representatives in recent weeks.

"According to the newspaper Rugby Paper, delegations from Racing Metro 92, of Clermont and Toulon have met the player's agent Leigh Halfpenny in London last week.

"Racing Metro 92 through its president Jacky Lorenzetti wishes to deny this information as it is concerned: it does not fall into the proposed bidding agents."

Halfpenny, who was named the Six Nations Player of the tournament in 2013 and was Lions man of the series in Australia, is one of the hottest properties in world rugby.

The 44-times capped Welsh international played all three Tests in the 2-1 Test series victory over Australia this summer.

His personal tally of 49 points was a Lions record for a Test series, beating the previous best of 41 set by Lions and Wales kicking coach Neil Jenkins in 1997.

He was part of Wales' Grand Slam success in 2012 and the Six Nations title-winning side in 2013.

Halfpenny is the latest Welsh international to be linked with a move away from Wales, with Roberts and Lydiate the most recent to head across the channel.

The Cardiff Blues have stated they are hopeful of agreeing new deals with Halfpenny and Wales and Lions captain Sam Warburton, who is also out of contract at the end of the new season.

"I've been having discussions with Leigh's agent for a while now," Blues chief executive Richard Holland said.

The this year to help them hang onto their best players, rather then see Wales' top players leave for clubs in France and England.

"They are committing £1m this year to the regional game, so it remains to be seen how that gets invested and I'm looking forward to working with the other three chief executives and [WRU group chief executive] Roger Lewis and Stuart Gallagher at RRW [Regional Rugby Wales] to see how we can invest that.

"Those discussions will take place in the coming weeks and it's a positive step, a positive move."