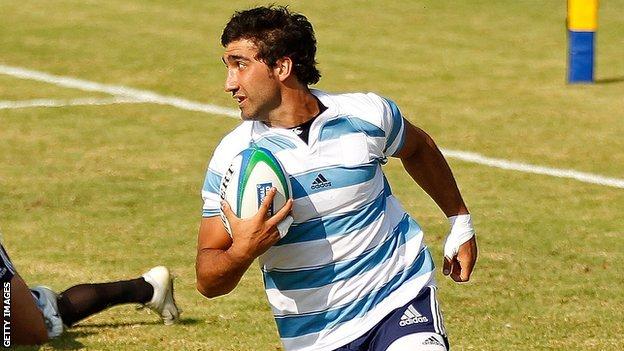 The 25-year-old back, who can play centre or full-back, was most recently with French club Carcassonne and has also played in South Africa.

Ascarate told the Warriors' website: "This is a great move for me."

And head coach Gregor Townsend added: "Gabriel can play in a number of positions in the backline, is very strong in defence and has an intelligent kicking game."

Glasgow have a lot of very good players, including three British & Irish Lions, so it'll be difficult for me to get into the team

Ascarate has won eight caps and was part of the Argentina squad that faced England in June.

"I'm excited about the prospect of playing in the RaboDirect Pro12 and Heineken Cup with Glasgow next season," he said.

"I should be able to settle in quickly after playing in Europe last season and then in the summer against England.

"I'm happy that I'll have a month of training with the squad before the new season gets underway, which will give me plenty of time to get to know my new team-mates.

"Glasgow have a lot of very good players, including three British and Irish Lions, so it'll be difficult for me to get into the team, but I'll work hard to try and achieve great things with Glasgow."

Townsend revealed Glasgow had "conducted a global search" to secure a replacement for Peter Horne, who was .

"He has played at a high level and most recently played at inside centre for Argentina in their second Test against England, so he should be in good condition for the new season," added the former Scotland international.

"He will be an excellent addition to our squad."