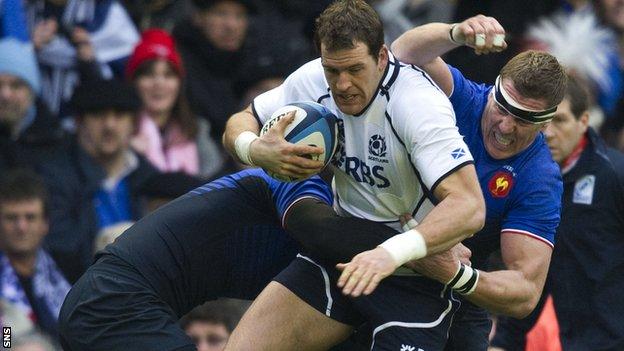 Claims by former Scotland full-back Rory Lamont that players are pressured to play through injuries is to be investigated by his home rugby union.

But Scottish Rugby chief executive Mark Dodson expressed surprise at the suggestions by the now-retired Lamont.

"We're right at the cutting edge of medical care and we mean to stay in that position," said Dodson.

"We have a world-leading medical team led by Doctor James Robson, who is respected throughout the world and who's a British Lions doctor.

We look after our players extremely well and ensure these people are fit, looked after properly and only reintroduced to the field when they're fit enough to do so

"I'll have a look at it and I'm sure James will.

"We look after our players extremely well and ensure these people are fit, looked after properly and only reintroduced to the field when they're fit enough to do so.

"Moreover, we're talking to the RIB at the moment about concussion protocols that exist and the experiment that's taking place."

Lamont failed to fully recover after breaking his leg against France in a 2012 Six Nations match and the 30-year-old former Glasgow Warriors full-back announced his retirement from rugby in April because of the injury.

He recalled the autumn Test against New Zealand in 2010 when he started the match nursing a hamstring injury and failed to finish the match.

"I didn't feel that I could withdraw myself from that match," he said.

"I was unsure if I was going to be able to make it through the game. I felt that I didn't really have a choice if I wanted to keep on trying to be picked for Scotland and keep a good relationship with the coaches."

Lamont said he had witnessed players cheating concussion tests in a bid to be back in action before they are safely ready.

"Unless people identify the issues and come out and actually speak about it then things aren't going to change," he said.

"At the moment, it's a ticking time-bomb with the concussions. Sometimes you can be put under a huge amount of pressure, where you feel you have no other choice but to take the field, when you know there are possible consequences."

Perthshire-born Lamont won 29 caps for Scotland after making his debut against Wales in 2005.

His first spell with Glasgow was from 2004 to 2007, when he scored 19 tries in 55 games before moving to Sale Sharks and then Toulon.

He left the French club to rejoin Glasgow in 2011 but only made six appearances in his second stint.

"I spent a whole season with a broken scaphoid when I was at Toulon and I was refused a scan on it," added Lamont. "They just kept playing it down as something insignificant, whereas effectively I was running the risk of arthritis in later life by not having it fixed."