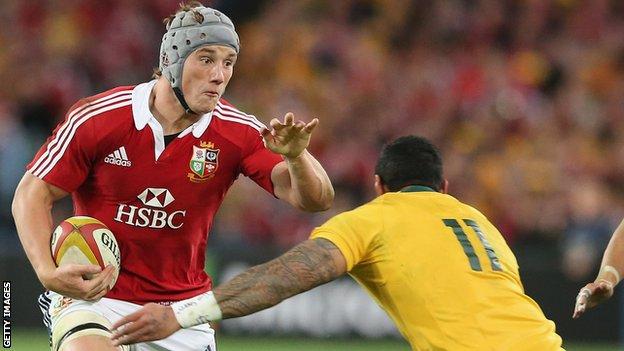 The Scarlets are ready to open talks with British and Irish Lions centre Jonathan Davies about a new contract.

Davies played in all three Tests in the 2-1 series win over Australia but his Scarlets contract ends in May 2014.

The region will also talk to Welsh internationals Rhys Priestland and Scott Williams about new deals.

"Jon has a season left with us and we will start speaking to him as soon as he comes back from holidays," said Scarlets attack coach Mark Jones.

"Hopefully, he will settle down here for a long time further."

Davies was at the heart of a huge row when he was controversially selected ahead of of legendary Irish centre Brian O'Driscoll for the third and deciding Test in Sydney in July.

But he played his part in the Lions stunning 41-16 win over Australia in Sydney to clinch a first Test series victory since 1997.

His performances in Australia make Davies, 25, one of the highest-profile players remaining in the Welsh domestic game.

And the Scarlets saw Lions wing George North depart for Northampton Saints at the end of last season after failing to agree terms over a new contract.

Jones believes the key to keeping Davies at Parc y Scarlets is to convince the player the region can help his career.

"We have to fulfil his ambition," said Jones.

"Jon will be coming back from a very successful Lions tour and he is going to want to come back to an environment he feels is going to get the best out of him, so he can keep on playing for Wales and getting on future Lions tours."

Priestland is also out of contract at the end of the season, while Williams signed a new deal with the Scarlets in April.

"We want to keep hold of all of our Welsh international players," said Jones.

"You are looking at three individuals, Rhys Priestland, Jon Davies and Scott Williams, who would be perhaps household names with the Wales squad.

"We definitely want to keep those players within the region and I am sure talks will start imminently about extending those gentlemen's contracts with this region.

"We want those players to be putting that Scarlet jersey on for a number of years yet."