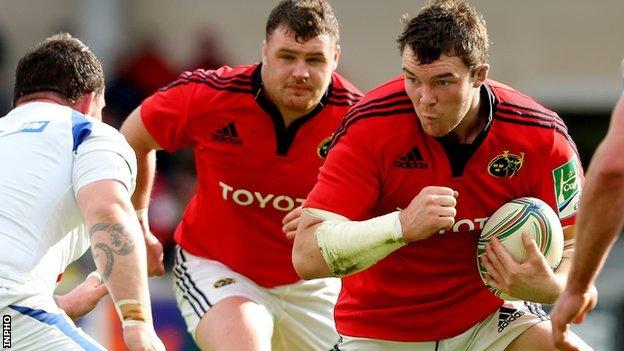 Back row forward Peter O'Mahony has been named as the new captain of Munster for the forthcoming season.

The 23-year-old captained the Ireland touring squad on their recent tour to North America and takes over the role from Doug Howlett, who retired in June.

O'Mahony previously captained the Irish province during the 2011-12 season in Paul O'Connell's absence and formerly skippered Ireland at U20 and U18 level.

He captained Munster A to the 2010 inaugural British and Irish Cup final.

With 46 Munster caps to his name Peter made his league debut in January 2010 as a replacement against Ulster.

He then put in a man-of-the-match performance on his Heineken Cup debut against Northampton Saints in November 2011 and scored his first Munster try a week later against Castres Olympique.

He has represented Ireland on sixteen occasions.

"Captaining Ireland and your country is huge, and obviously that experience will stand to me but I'm just delighted with this opportunity," said O'Mahony.

Munster coach Rob Penney described O'Mahony as "a naturally gifted leader who has a lot of attributes that are special and intrinsic to our squad".