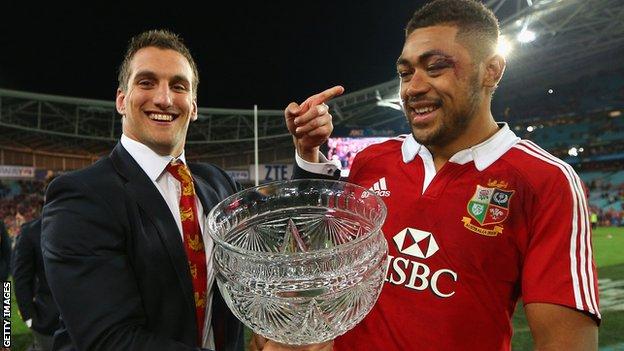 The 22-year-old British and Irish Lions forward has just one year of his Rodney Parade contract remaining.

Jones says if money is the decisive factor then the Dragons will struggle to prevent Faletau following Dan Lydiate's example and moving on.

"It depends what his motivation is," Jones said.

Faletau played in the final Lions Test in Sydney, which saw the tourists beat Australia to seal a famous 2-1 series victory.

Flanker Lydiate also starred for the Lions, but will be playing his domestic rugby in France for Racing Metro next season after spending six years with the Dragons.

The big consideration for a professional rugby player in the situation Toby is in, is making sure you have a successful international career

However, newly appointed Jones believes Faletau may have a different outlook.

"I met Toby on one occasion and he is very passionate about Gwent rugby and that's nice to hear," added Jones.

"It depends on your personality type and Toby is a shy character and he is very at home here in Gwent.

"I will look forward to meeting with him next week to push things forward a little bit."

The Dragons head into a new RaboDirect Pro12 season after finishing second from bottom in the 2012-13 campaign.

Jones, who moved to the club from London Welsh, is determined to get the Dragons up the table.

And he is keen to look after Faletau, who he says is "the best number eight in the UK".

"It's important that Toby is happy with myself and the coaching set-up, and as long as he's happy that we have an environment here that can satisfy him and improve him, I think that's important," Jones said.

"Money's important, but depending on where you are in your career.

"If he is interested in the bottom dollar then that's fine - we won't be able to compete with several clubs who will come onto the market for him.

"The big consideration for a professional rugby player in the situation Toby is in is making sure you have a successful international career.

"One thing with staying in Wales is that the regions will look after their players and make sure their game-time at a young age is reduced so that their ability to perform at a higher level is more consistent and for a longer period.

"Everything comes with a price. Asking his French coach for a weekend off before an international, I'm not sure what response he will get."

Faletau has made 58 appearances for the Dragons since making his debut in the 2009-10 season.