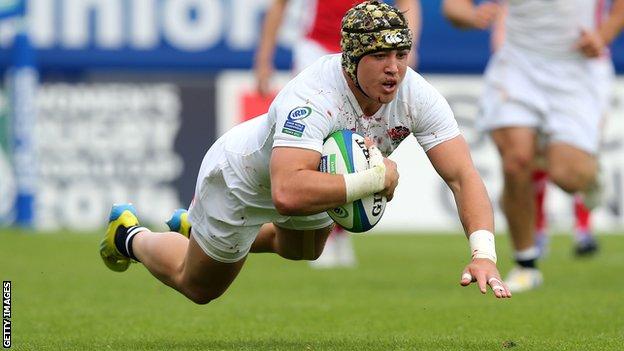 Exeter Chiefs youngster Jack Nowell has been rewarded for his fine form for both his club and England Under-20s with a call-up to the Saxons squad.

The 20-year-old full-back or centre was part of the Under-20 side which won the World Cup in the summer.

"He's an exciting young player and the sooner we get him into the squad and start working with him, the better."

Nowell, who was named as part of the 32-man Saxons squad, alongside Exeter Chiefs team-mate Tom Johnson, scored England's first try in their 23-15 victory over Wales in the final of the Under-20 World Cup.

He played at Cornish Pirates, Redruth and Plymouth Albion on loan and made his first-team debut for the Chiefs in October 2011, going on to make 11 Premiership appearances.

The Saxons will face the Ireland Wolfhounds and Scotland A early in 2014.