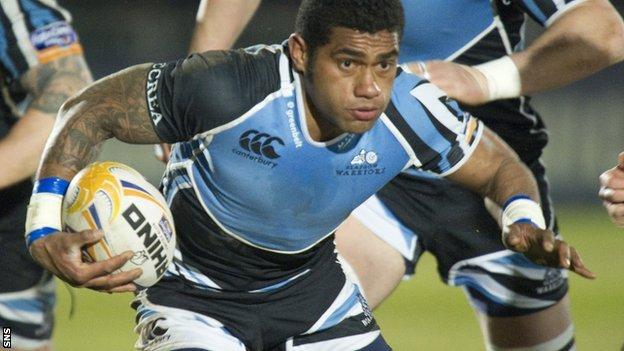 Glasgow Warriors scrum-half Niko Matawalu will miss the start of the season after the Fiji international broke a bone in his foot.

The 24-year-old has damaged the fifth metatarsal in his right foot during training and has undergone surgery.

Glasgow, who kick off their season in September, say he will be out for "several weeks".

Head coach Gregor Townsend said: "He brings so much to the squad both on and off the pitch."

We're naturally disappointed that Niko will miss the start of the season, but there will be good competition for the number nine jersey this season

after being named player of the year at the end of his first season with Glasgow.

But Scotland internationals Chris Cusiter and Henry Pyrgos, plus Scotland Under-20 cap Ali Price, who has joined from Bedford Blues, will now be vying for Matawalu's position when Glasgow start their RaboDirect Pro12 season against Cardiff.

"Chris is scheduled to return to full training within the next couple of weeks and I've been really pleased with how Ali has adapted to our training since he joined us a few weeks ago," added Townsend.

"Along with Henry, who is coming off the back of an excellent season with Glasgow and Scotland, there will be good competition for the number nine jersey this season."

Glasgow have reported good progress on the recoveries of Mike Cusack, Finlay Gillies, Dougie Hall, Ruaridh Jackson, Pat MacArthur and Duncan Weir, who are all expected to be fit for the "early part of the season".

However, back Peter Horne has had an operation on his damaged cruciate ligament and is in the early stages of his rehabilitation, while Scotland forward Ryan Wilson is out for six months with a shoulder injury.