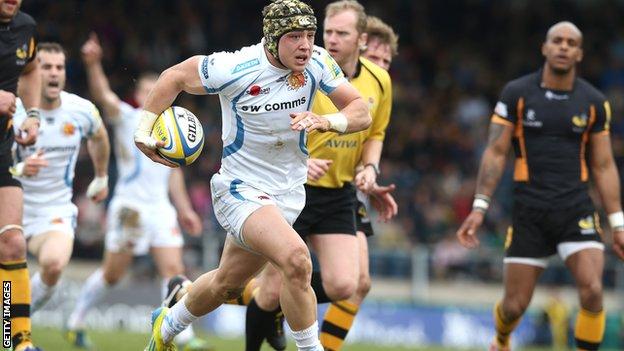 Exeter Chiefs youngster Jack Nowell says he has been shocked by his call-up to the England Saxons squad.

The 20-year-old full-back or centre was part of the Under-20 side which won the World Cup in the summer.

"It feels amazing, I really wasn't expecting it at all," Nowell told BBC South West Sport.

"I found out when I read about it on the internet. Since then I've spoken to a couple of the coaches but I didn't get any prior warning at all."

Jack's an exciting young player and the sooner we get him into the squad and start working with him, the better

Nowell said the coaches, including attack specialist Mike Catt, had told him that his surprise selection was a reflection on his form for both club and country.

"They just said the reason you're there is how you've been playing - at the World Cup for the U20s and for way I finished for Exeter," Nowell continued.

"I think the U20s has been massive for me. You're playing with guys your own age, and gets you in that England environment and being away with a group at a tournament. It's an amazing experience."

Nowell, who scored England's first try in their 23-15 victory over Wales in the final of the Under-20 World Cup, will be joined in the 32-man Saxons squad by his Exeter Chiefs team-mate Tom Johnson.

"I think it's only a matter of time before we get more Exeter boys in the England set-up, including some of the U20 guys like Henry Slade, Sam Hill and Luke Cowan-Dickie," he said.

"It's great to have Tom with me and I'm sure he'll look after me when I'm there!"

England head coach Stuart Lancaster singled Nowell out for particular attention when the squad was announced, explaining why the youngster had been picked for the Saxons.

"He's an exciting young player and the sooner we get him into the squad and start working with him, the better."

Nowell played at Cornish Pirates, Redruth and Plymouth Albion on loan and made his first-team debut for the Chiefs in October 2011, going on to feature 11 times in the Premiership.

The Saxons will face the Ireland Wolfhounds and Scotland A early in 2014.