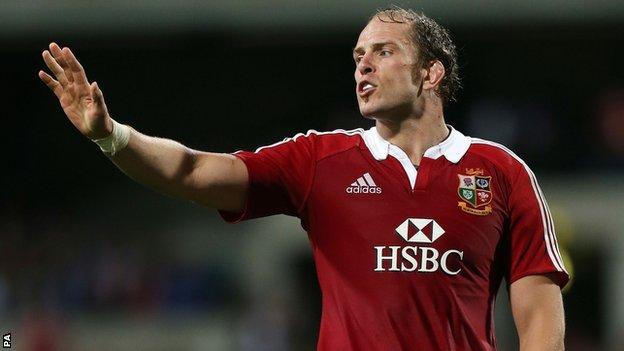 Ospreys chief Andrew Hore admits they may find it hard to keep hold of some of their British and Irish Lions stars.

The Welsh region provided five players to the tourists as they beat Australia 2-1 in a thrilling Test series.

and locks Alun Wyn Jones and Ian Evans have a year left on their Ospreys contracts.

"Yes, we've got challenges with three Lions coming up [to the end of their deals] at the end of the year and we'll be working hard on them," Hore said.

Hore has highlighted that top Welsh stars are already the beneficiaries from combined incomes from the regions, Wales and the Lions and a joint strategy involving the Welsh Rugby Union and Regional Rugby Wales is needed via the Professional Regional Game.

The Ospreys' other two 2013 Lions, hooker Richard Hibbard and flanker Justin Tipuric, are under longer-term deals.

"So Hibs [Hibbard] will be here and obviously Tips [Tipuric] which is fantastic, and the other boys are here this year," added chief executive Hore.

Alun Wyn Jones captained the Lions in the final, series-clinching Test in Sydney after Welsh compatriot Sam Warburton was ruled out through injury.

Both he and prop Adam Jones played in all three Tests, while Evans was a powerhouse in the midweek side and unfortunate not to force his way into Test reckoning.

The Welsh Rugby Union has to be distributed among the four regions - Ospreys, Cardiff Blues, Newport Gwent Dragons and Scarlets - this season.

However, there remains ongoing concerns in Wales at the numbers of top level players who have left for richer French and English clubs.

But Hore admits that it could cost Ospreys up to £1m in wages a season just to re-secure those three Lions stars who are out of contract next summer.

"Potentially yes, without a doubt and that's where we are extremely grateful that there's been a million this year but we've got to keep it in context," Hore added.

"It's really difficult because all of a sudden market forces come into play and these young guys who have been bubbling away quite nicely accelerate in cost.

"It'll be interesting over the next 18 months to two years to see what happens.

"Like any business that's just life and we're in a very lucky position that we've got some good young people coming through."

At least for the coming season Hore is content with how the squad is shaping up, with their established players augmented by some new signings and home-grown talent rising though the ranks.

"In the final of the Under-20s [Junior World Championship], seven of those players were from the Ospreys region.

"The increased investment has been great and we felt we just needed to balance the squad a little bit more, and we've done that.

"We've obviously got Eli Walker and Hanno Dirksen in the wing stakes, but we've brought in a young fella, Jeff Hassler from Canada, who will be a welcome addition and a Fijian international [Aisea Natoga] as well.

"We just felt we needed that strike-force right through the season, make sure we had depth."