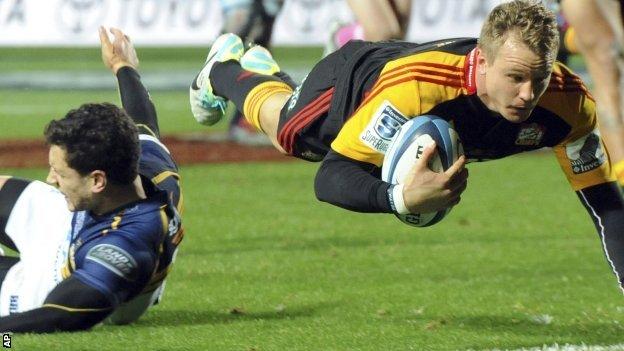 A Christian Lealiifano interception gave the Canberra-based Brumbies the opening try and a 16-9 half-time lead.

However, Chiefs pressure was turned into their first try from Liam Messam, and full-back Robbie Robinson burst through a gap to score a second.

Lealiifano scored all of his team's points to match the Super Rugby final record set by Joe Roff, also playing for the Brumbies, in 2004.

"It was a messy first half," said Chiefs coach Dave Rennie.

"They were able to get in and slow a lot of our ball and steal ball and we got sucked into trying to push too many passes. So there was real character shown in that second half. We got great impact off the bench."

Brumbies coach Jake White said: "Last week we were dead and buried in the 78th minute and we ended up winning (against the Bulls) and I had a little feeling it might happen again tonight.

"Obviously you have to be a bit disappointed. I don't want to single out players in our squad but there were a lot of mistakes that were made when the pressure was on, and that happens in finals."