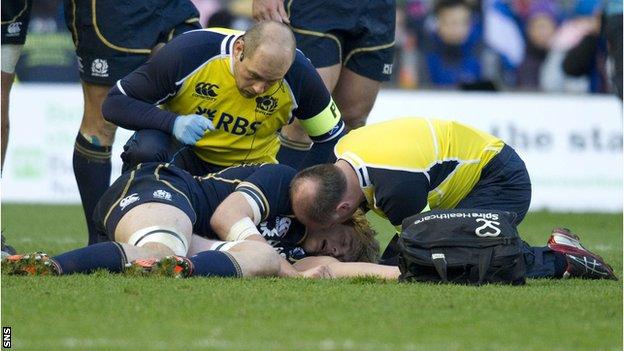 This is going to be my shortest ever blog, and I'd like your comments.

The new research by Dr Willie Stewart, and the pictures that go with it, are in my view a game-changer for rugby.

Summarised: for the very first time his work links early onset dementia to a rugby player after analysis of his brain.

Dr Stewart, a consultant at the Southern General Hospital in Glasgow, said: "What we are finding now is that it is not just in boxers. We are seeing it in other sports where athletes are exposed to head injury in high levels.

"Those sports include American football, ice hockey and also now I have to say I have seen a case, the same pathology, in somebody whose exposure was rugby."

I feel like shouting hallelujah! I am fed up of watching international players being concussed, knocked out, sent dizzy - whatever you want to call it - and then either jumping back to their feet and playing on or going to the sidelines then wandering back.

It happened in both the Six Nations and the Lions tour; it was wrong.

I don't want one rugby player to injure his brain to the extent that he or she will be limited later in life.

I feel I got out of the game relatively unscathed. The international rugby I played was probably akin to amateur club rugby nowadays.

The knocks weren't fearsome. I don't remember too many knockouts and my worst episode happened perhaps twice when I lost my sight when back in the clubhouse. I now know this was concussion.

Luckily, I knackered my knee which probably meant my brain was protected.

But when I watch rugby, and the online 'big hits', it's obvious that the hits are harder and the brain trauma is worse than it used to be.

My final thought on this is: every rugby player has it within them to be big enough to get off the pitch if they are dizzy.

The sport should also be self-confident enough to be able to spot when a player has been concussed and get him or her off the pitch.

I'm not sure it's about padded headgear, or changing the laws, or enforcement. It's more about making every rugby player and administrator realise something that most of us actually know; you only get one brain.

These are my views, but what do you think?