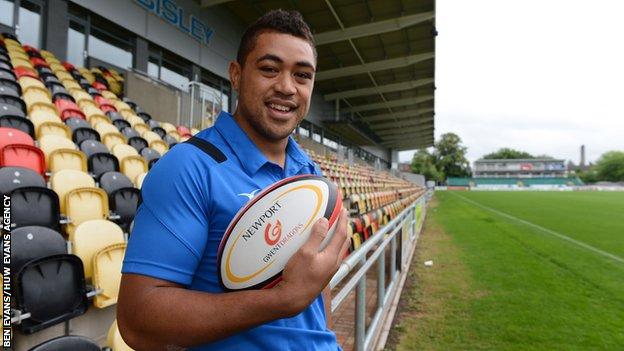 Number eight Toby Faletau has agreed a new contract which will keep him at the Newport Gwent Dragons until June 2016.

The Wales and British and Irish Lions forward's decision to sign a two-year contract extension at Rodney Parade is a major boost for Welsh rugby.

Faletau played in the Lions' 41-16 victory over Australia in the third Test in Sydney.

"I'm pleased to have committed to the Dragons so early in the season," said Faletau, 22.

"This will help me to concentrate on my on-field performance and the challenges ahead this season. With the reputations of [Dragons head coach] Lyn Jones and [assistant coach] Kingsley Jones preceding them, I'm looking forward to working with them and developing further as a player.

"It's clear the Dragons are taking steps to develop the region and its team, with a number of new signings both on and off the field."

Tongan-born Faletau was out of contract at the end of the 2013-14 season.

His decision to stay in Wales bucks the growing trend of Welsh players leaving for big-money contracts offered by French and English clubs and the chance of regular Heineken Cup rugby.

His Lions and Wales team-mate Dan Lydiate will play for Racing Metro this season after spending six years with the Dragons.

Along with Lydiate, fellow Lions Jamie Roberts (Blues to Racing Metro) and George North (Scarlets to Northampton) have also departed from the Welsh domestic game during the summer.

Dragons' chairman Martyn Hazell says the Welsh region had to fight off other clubs to keep Faletau in Wales.

"There was fierce competition for Toby's services, but by securing Toby's future here at Rodney Parade it clearly shows our ambition as a board of directors and as a business to further develop the Dragons brand," said Hazell.

I have been extremely impressed with Toby's drive and motivation

"Toby is important to growing our business on and off the field and shows our commitment to becoming the best region in Wales."

The 26-time capped international has been a Wales regular since the 2011 World Cup.

He was not picked for the Lions' first two Tests against Australia, but produced an impressive performance in the third and final Test against the Wallabies as the Lions sealed the series.

Faletau was part of the Wales side which reached the semi-finals of the 2011 World Cup in New Zealand, and won the Six Nations Grand Slam in 2012 and Six Nations title in 2013.

His performances in the Dragons back row alongside Dan Lydiate have been among the highlights of a difficult few years for the Men of Gwent.

The Dragons finished one off the bottom of the RaboDirect Pro12, a poor campaign that led to management changes, with former Ospreys and London Welsh coach Jones now in charge, while seven new signings have arrived for the upcoming season.

"Toby has made a good decision early on in the season, putting an end to all the speculation surrounding his future," said Jones.

"Throughout discussions with Toby I have been extremely impressed with his drive and motivation, not only on a personal level but in his commitment to developing the Dragons into the best team in Wales.

"I'm looking forward to working with Toby, helping him to be the best he can be, not only for the Dragons but for Wales."