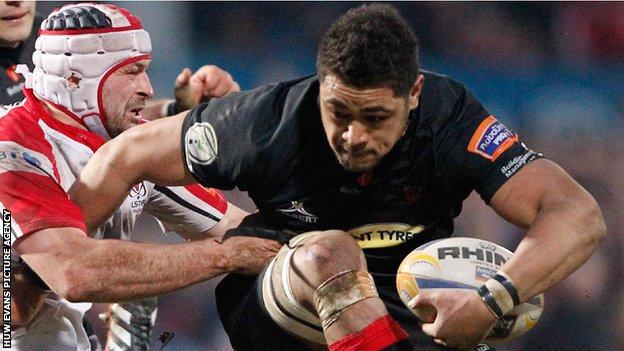 The number eight has signed a two-year extension on his contract which will keep him at Rodney Parade until 2016.

"They [the WRU] wanted us to sign him obviously but they haven't given any assistance to sign him, we've done it on our own budget," said Hazell.

Lions and Wales star Faletau's contract was due to end in May 2014.

Hazell added that the region, who finished bottom-but-one in the Pro12 last season, had been focused on securing the signature of the Tongan-born player.

"It hasn't been that hard work because it's been concentrated and Tony's been fine over it," said Hazell.

"We've raised the budget a little, but not ridiculously. I mean we're not going to bankrupt the region for anybody.

"It's a board decision and it's worked out within budget."

Fears had grown that Faletau would leave the region following the departure of his back-row colleague Dan Lydiate for Racing Metro at the end of the 2012-13 season.

The pair both played key roles in the British and Irish Lions' 41-16 win over Australia in the third Test match in Sydney in June.

However, Hazell said that competition from French and English clubs had evaporated early on during negotiations.

"There was competition early on, but we decided that we were going to keep him and it's the right decision for us and for him," he added.