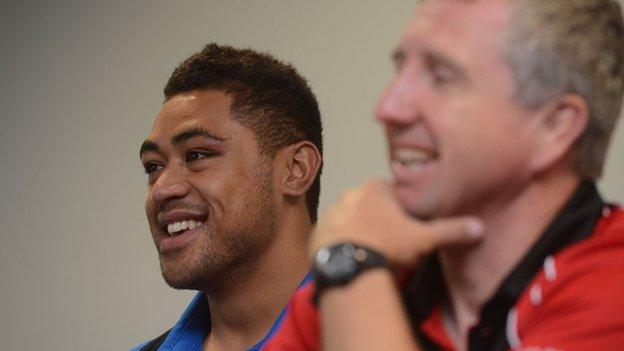 "It shows good intent from Martin Hazell and the board of the Dragons to fulfil their vision, which is to become the best region in Wales."

The Welsh domestic game has seen a stream of international players departing for France and England in recent seasons.

The Dragons lost flanker Dan Lydiate to Racing Metro during the summer, while Jamie Roberts has gone from Cardiff Blues to Racing Metro and George North from the Scarlets to Northampton Saints.

All three played alongside Faletau in the British and Irish Lions' decisive 41-16 third-Test victory against Australia in June, and the Tonga-born player had been expected to follow suit after being linked with a move to Bath.

So the announcement he was staying at Rodney Parade is a boost for the Welsh game, and especially for the Dragons.

Jones, who was appointed coach in June, believes the contract extension will be an encouragement for other players to stay at the club.

"It's good for the other players to know that they'll be playing with one of the best number eights in the northern hemisphere," said the former London Welsh and Ospreys coach.

"Young rugby players want to earn money but they also want to make sure their future is a happy one, a safe one and a secure one.

"They want to win things and I think Toby coming to Gwent Dragons can help us get up and challenge for silverware in a few years.

"It's good for the club and good for everybody involved that we get an early decision on his future so we can all move on and do what we're here to do and that's become better at rugby."

The Dragons finished next to bottom in the Pro 12 last season - only Italian outfit Zebre had fewer points - and Jones accepts there is a lot of ground to make up on the other sides in the league.

But he believes Faletau committing to the region for another two years can be a catalyst for improvement.

"It's a very important signing for Gwent Dragons," said Jones.

"It's very important for the region, the players and the young players in the academy to see a product coming through the academy and see what he's grown into.

"It's good for them to see the success he's made for himself and we need to build on that and help him realise and grow to the next level.

"There's a lot of growth and a lot of coaching required with this current squad of players, so we need to take one step at a time.

"We need to become competitive and stop conceding as many points as we have and the players will be working hard towards that. It's just making sure that we're not a walkover for teams in the Pro12 next season."