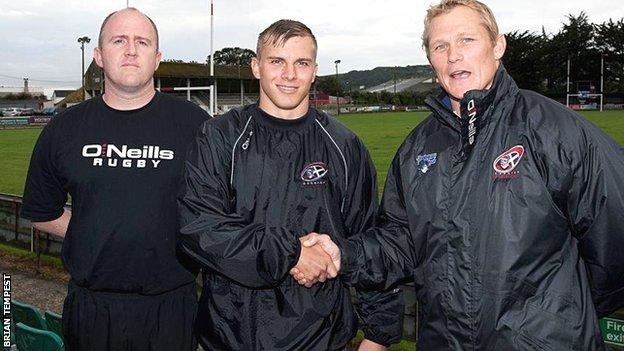 Cornish Pirates coach Ian Davies says the club plan to help with the development of rugby union in Guernsey.

The Pirates signed young Guernsey player Luke Jones on Monday, but Davies hopes there will be much deeper ties between his club and Guernsey rugby.

"We want to be linking up not only in terms of playing, but also in coaching development, marketing, sponsorship and so on," Davies told BBC Guernsey.

"If we can, we'll try to help Guernsey clubs improve, on and off the field."

Each club have their place in the pyramid

Davies said he and Cornish Pirates chief executive Josh Lewsey would travel to Guernsey to meet with Jeremy Frith, the director of the high-performance programme at the Guernsey Sports Commission.

"We hope this is the start of a very fruitful partnership," added Davies.

Jones, 19, is the first Channel Islander to earn an England Under-18 cap joined the Pirates alongside fly-half Angus Sinclair and scrum-half Mike Pope.

Davies said Jones fitted in with the Pirates' recruitment policy of bringing in young players who could help the club build for the future as they pursue their aim of being ready for the Premiership by 2016.

"Each club have their place in the pyramid," said Davies.

"We produce players for the next level of the game. I think it's 16 players over the last five years for the Premiership or the Rabodirect, Pro12 so we know that at the moment we're a stepping stone for players to reach that level.

"But we have ambitions too and the plan is to be Premiership-ready for 2016 with a new stadium in Truro and hopefully then we'll not be a stepping stone."