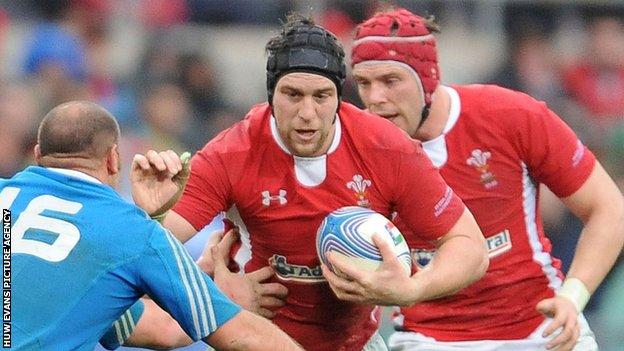 Ryan Jones says he would "love" to play for Wales again after his first summer off for 10 years.

The Ospreys back-rower captained Wales in three of their 2013 Six Nations matches before missing the clash with England because of injury.

He was omitted from the Lions and Wales touring parties during the summer, but says he wants to add to his 73 caps.

"If I start the season well and they feel I can do a job I'm more than happy to help out," he said.

Jones, 32, was selected as captain ahead of Sam Warburton for the victories over Italy and Scotland as Wales successfully defended their Six Nations crown in 2013.

But a broken bone in his right shoulder ended his tournament after 43 minutes of the game in Scotland and ruled him out of the 30-3 win over England in Cardiff.

He had recovered from the injury in time for the summer tours, but missed out on the British and Irish Lions trip to Australia, while Wales decided to rest him and other senior players as they took an inexperienced squad to Japan.

And with the re-emergence of Warburton as captain of the Lions and the inclusion of Dan Lydiate, Toby Faletau and Justin Tipuric in the squad that won the third Test 41-16 in Sydney, Jones appears to be lower in the Welsh back row pecking order.

However, the triple Grand Slam winner says he's still keen to be considered for the national team.

"It's something you can't replace in every day life there's no doubting that, and if I can stay competitive and I can stay fit and healthy and they deem me worthy you know I'd love to play."

Jones added that he felt fresh after a summer off from rugby.

"It's the first year in 10 that I've managed to have a bit of time, I haven't had an operation or haven't toured.

"So it's been nice to do all those normal things and be involved with the rest of the guys [Ospreys] as well from day one."

Jones is celebrating his testimonial year with the Ospreys having joined the region following the winding-up of the Celtic Warriors in 2004.

Along with Adam Jones and Gethin Jenkins, Jones was a member of the Wales teams that won the 2005, 2008 and 2012 Six Nations Grand Slams.