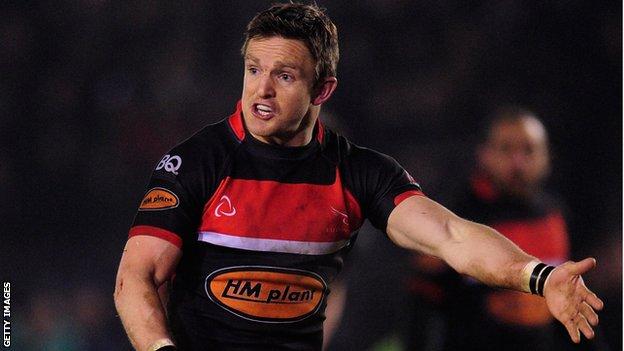 The 32-year-old, who made 31 appearances for and captained the national team, played club rugby with Edinburgh, Gloucester and Newcastle.

"I'm obviously gutted to have been forced to stop playing the game I love," Lawson said,

"I'll always look back on my career with immense pride."

Despite making 23 appearances as the Falcons earned promotion to the Premiership, Lawson missed part of last season with a foot injury.

It was with Edinburgh that the diminutive half-back made his name, earning a move to the Premiership with Gloucester.

His form at Kingsholm brought senior international representation, including the 2007 and 2011 World Cups and six consecutive Six Nations squads between 2007 and 2012.

Lawson led Gloucester to the LV=Cup victory against the Falcons in 2011, and represented the Cherry and Whites in Europe's Heineken Cup.

He opted to drop into the Championship in 2012-13 but remained involved with Scotland, making his final appearance against Tonga last November at Aberdeen's Pittodrie Stadium.

"I'm not entirely sure what the future holds at this stage but there are a few opportunities to explore," Lawson continued.

"I will continue to work closely with my RPA player development manager Mandy Thompson to identify what areas to focus on over the coming months and I'd like to thank her for her amazing support through this transition."

Falcons director of rugby Dean Richards said: "Rory has been a magnificent servant to the game and he will be sorely missed.

"He's a quality player, whose enthusiasm, wealth of knowledge and experience has really rubbed off on our players ever since he arrived at the club."