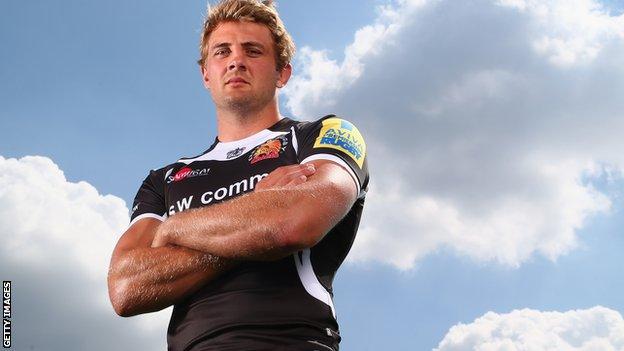 Exeter Chiefs have named Australia international Dean Mumm as their new captain for the 2013-14 season.

The 29-year-old lock, who joined from Super 15 side Waratahs last year, will replace Tom Hayes as skipper.

Hayes has been captain at Sandy Park for the club's three successful seasons in the Premiership and led them to promotion from the Championship.

"I'm very honoured to have been given the captaincy and I'm very excited about the opportunity," he said.

Mumm won 33 caps for the Wallabies and lined up against the British and Irish Lions for the Barbarians in Hong Kong this summer.

"Tom has quite a legacy here at the club because his time as captain has been one of real change and real success," he added.

"I say full credit to him for what he's achieved and it is a big job to try to fill his shoes.

"That said, you can't really approach it that way. You have to put you own mark on things.

"Tom has done an excellent job for us. He's a really strong leader still within the squad and I suppose I'm lucky to be the guy who gets to run out first onto the field."

Meanwhile, Exeter head coach Rob Baxter revealed the club are close to bringing in 27-year-old lock Romana Graham to the club from Super 15 side Chiefs on a one-year contract.

With lock James Hanks set to miss the start of the season after breaking his collarbone and Hayes recovering from back surgery, Baxter is keen to add to his second-row options.

"We've made the decision to strengthen our resources there and so we've gone back to a guy we've looked at before and we quite liked." said Baxter.

"What he's got to do is prove himself to be a Premiership starter and then it's really in his hands how much rugby he plays and how he goes.

"We're quite comfortable with what we've seen. He is a big guy, but we think we can work on a bit of his conditioning and add a bit to the amount of actions he makes in a game."