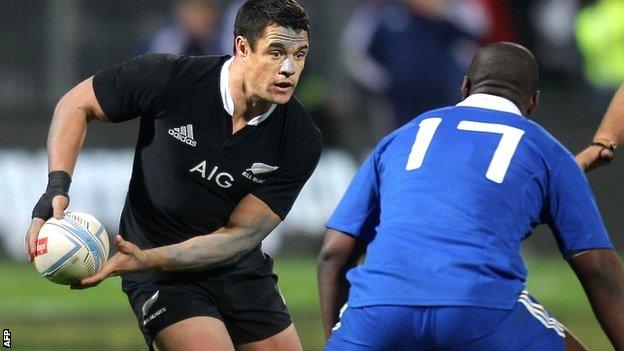 New Zealand fly-half Dan Carter will take a six-month break from rugby after his team's tour of Europe in November.

The 31-year-old, regarded as one of the best players of his generation, missed much of the the 2011 Rugby World Cup through injury and is keen to feature in 2015.

"When you play full-time at this level it does take a toll," Carter said.

"I've had a few niggles, so I'm keen to ensure I do everything I can to recover from those and prolong my career."

Carter is contracted with New Zealand rugby until the end of 2015 and will miss the majority of the next year's Super 15 season with the Crusaders, as well as the June international series.

While it is thought he could take the field for his Christchurch club, Southbridge, during his break, the absence from top-level rugby will allow him to spend more time with his wife, Honour, and their four-month old son Marco.

"The extended break will allow Dan to do all the things he needs to do to give himself a chance to appear at the Rugby World Cup," New Zealand coach Steve Hansen said. "That's a huge positive for both us and him."

Carter, who has played in 95 Tests and 11 Super Rugby campaigns, said: "Ultimately, I want to play in the next Rugby World Cup in 2015.

"To do that, it's important that I put myself in the best possible position, both physically and mentally,"