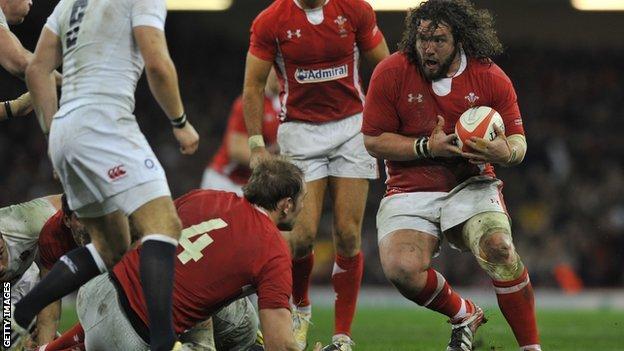 Adam Jones says he will consider a move to France when his Ospreys contract ends at the conclusion of the new season.

The Wales and Lions tight-head prop has started negotiations with the Ospreys over a new deal.

Jones, locks Alun Wyn Jones and Ian Evans all have a season left on their contracts at the Liberty Stadium.

"I have to look at what is best for me and my family...whether it is to stay here or go to France," said Jones.

"As much as I love this region (Ospreys), if I can look after my family by going to play in France, I am willing to do that.

"You would be dull to turn that money down. I wouldn't want to cut any ties with the region but my family comes first and I have to look at that very seriously if any offers come in."

Jones, 32, has been linked with a move to France before, but turned down the chance to leave the Ospreys in 2012 when he signed a new two-year deal to stay in Wales.

The 88-times capped international has been a cornerstone of Wales' success and he has been part of three Six Nations Grand Slams - 2005, 2008, 2012 - as well as winning won five Test caps for the British and Irish Lions.

Jones, who was part of the victorious British and Irish Lions tour of Australia in 2013, has revealed he has started talking to the Ospreys about a new deal at the Liberty Stadium.

"We sat down last week with the Ospreys," said Jones.

"Nothing has happened since and we just have to wait and see what happens now and what offer comes on the table."

Welsh rugby has seen an exodus of talent in recent years, with George North (Northampton Saints), Jamie Roberts and Dan Lydiate (both Racing Metro) the latest to leave.

Jones, who has played for Wales in the 2003, 2007 and 2011 World Cups, has also targeted the tournament in England in 2015 before he retires from international rugby.

"I would like to get to the next World Cup and I would probably finish after that," said Jones, who says he will carry on playing club ruby after his international retirement.