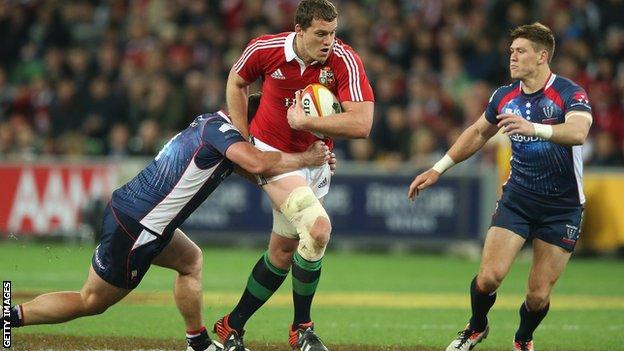 Lock Ian Evans says he has not opened negotiations with the Ospreys over a new contract but admits he is happy to stay in Wales.

The Wales and Lions second row is out of contract at the end of the 2013-14 season along with team-mates Alun Wyn Jones and Adam Jones.

Evans, 28, has played all his professional career with the Ospreys.

"It is still early days and I haven't been in touch with the Ospreys yet," he said.

The second row, who did not feature in the 2-1 Lions Test series win over Australia in the summer, looks set to follow in the footsteps of Wales number eight Toby Faletau who signed a three-year deal to stay in Wales with the Newport Gwent Dragons.

Prop Adam Jones, his Ospreys and Wales team-mate, has publicly stated he would consider joining the exodus of Welsh players playing in France.

The 30-times capped Evans says he is not concerned that the Ospreys have not been in touch to start contract negotiations.

"It's early days, it is August, and I am just looking forward to playing with the Ospreys," said Evans.

"The right people will be in contact if they want to renew your contract. I am more than happy here but unless you get offered something, you have to keep your options open.

"Everybody has a different personal perspective on things and everybody wants different things in their careers. Toby has got what he wanted and he is more than happy and that's why he signed."

Evans made his debut for Wales and scored a try against Argentina in June 2006.

While he describes himself as a "home bird", Evans admits he will make the decision on his future based on what is right for his family.

"I am expecting a little one and I want my family around me, but at the end of the day I have to provide for my family," said Evans.

"That is first and foremost from my point of view. I am more than happy with where I am. I am a home bird and my family are around me and I still want them to be a part of things."