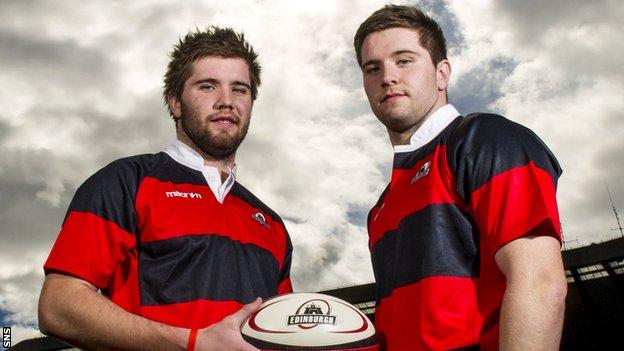 The 21-year-old Brisbane-born locks, who have a Scottish mother, arrive from Queensland side GPS Old Boys and Australia's national academy programme.

The duo will be on Edinburgh's elite development roster.

"They're both very athletic and mobile, which are important attributes in the modern game," said Edinburgh assistant coach, Stevie Scott.

"We're delighted to welcome these two boys to the club, having identified them as hot prospects for the future through their performances in Australia's top domestic division."

The twins have played for the Old Boys since the age of six, while Ben has also played for Australia's under-18 and under-20 volleyball teams.

Alex Toolis said: "I'm a bit nervous but really excited to get this opportunity in the home country of my mum, who's delighted that I've come here to play rugby.

"It's good to get out of my comfort zone. I'm looking forward to working hard to get the most out of the experience, and to do myself and my family proud."

His brother Ben added: "One of the main reasons I've come here is because I want to work hard and play hard.

"It's how you mature as a player and as a person and it's an important part of being a good second-row."