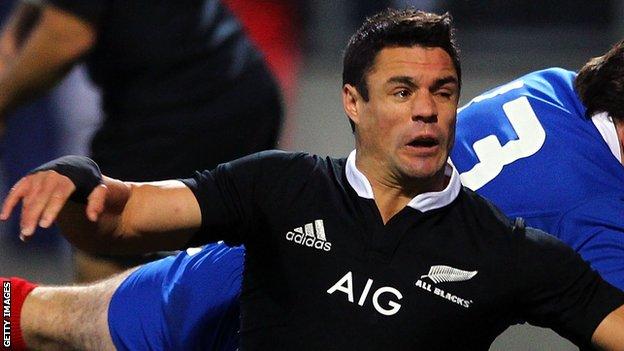 New Zealand fly-half Dan Carter has injured his calf and will miss his side's opening two Rugby Championship fixtures - both against Australia.

Carter, 31, injured his calf during a warm-up match on Friday and aggravated it during Monday's training session.

"He was a bit sore after training so we got a scan and unfortunately he's damaged his calf," confirmed All Blacks coach Steve Hansen.

Carter is set to take a six-month break from all forms of rugby from November.

"It does sound dramatic because he's been there before and he's out for three or four weeks," added Hansen.

"But talking to the doctor, it is that length [of time] because we want to make sure that he's right when he comes back."

Aaron Cruden, who plays at fly-half for the newly-crowned Super 15 champion Chiefs, is likely to start Saturday's Test in Sydney.

The return match with the Wallabies is a week later on 24 August, while the world champions then play Argentina on 7 September.