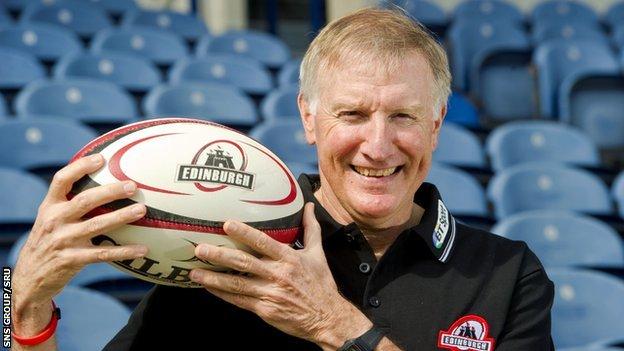 New head coach Alan Solomons is warning there will be no quick fix for Edinburgh this season.

But the veteran South African is confident there will be signs of better times to come after a period of evaluation for the squad he inherits.

"I am aware of the fact this is going to be a little bit of a process," the 63-year-old told BBC Scotland.

"But I would hope that, by the end of two months, we'll see the green shoots of improvement coming through."

Solomons, a former Springboks assistant coach, has only just finished his term as director of rugby at Kings and Eastern Province Kings.

And he is charged with improving the fortunes of an Edinburgh side that finished 10th in the Pro12 last term, losing 15 of their 22 league games, and 11th in the previous campaign.

"I only finished on 3 August and others have taken the reins for pre-season," he admitted.

"I don't have a great deal of knowledge of the Edinburgh situation.

"I'm aware of the last two years and obviously people are disappointed with the results.

"We start work straight away and the first two months will give me time to evaluate."

Solomons will get a good look at his players during a high-performance campus, which begins on Sunday at Loughborough University, with new defence coach Omar Mouneimne also in place.

"That will take longer than a season, but I would certainly like to see the foundations settled this year.

"It's going to take a while and that's understandable given Edinburgh's situation."

Solomons has experience of northern hemisphere rugby from his times coaching at Ulster and Northampton.

"My philosophy is simple. I want to create an environment in which each individual and the collective can realise his and their potential.

"It's all part and parcel of creating the right environment so the players and the team can flourish."