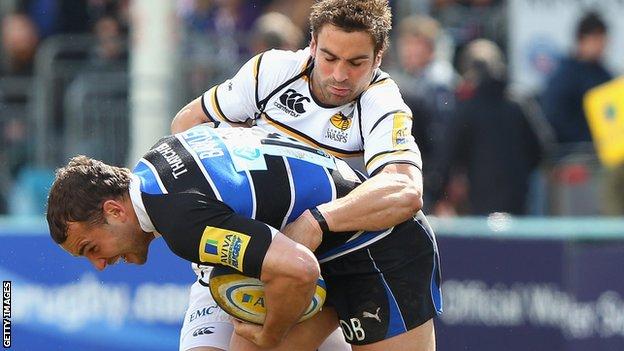 Bristol fly-half Nicky Robinson says he joined the Championship club because they are set up for the Premiership.

The former Wales international moved from Wasps this summer after spending his whole career in top-flight rugby.

He is one of 10 close-season arrivals as the club heads into its first season under new coaching team Andy Robinson and Sean Holley.

"It's really a Premiership club - that is what's attracted so many established players," he told BBC Radio Bristol.

"The set-up off the pitch and the vision of the club is the important thing and we're all here to get promoted."

Since Andy Robinson was appointed director of rugby in February, the former England and Scotland coach has overhauled the West Country outfit.

Alongside the influx of players, 12 players have been released and Liam Middleton - who was sacked in March - has been replaced as head coach by Holley, who will be assisted by Harrison.

"Everyone at the club want to be playing Heineken Cup rugby and when you look at the size of the city, it's a realistic aim," fly-half Robinson continued.

"That made the decision [to drop down a division] easy. It's a great challenge and I think playing in this league, we established players will learn a lot about ourselves."