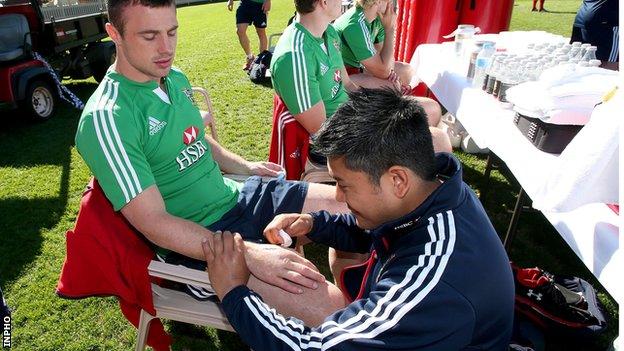 Ulster wing Tommy Bowe could miss the first three months of the season due to the wrist injury he sustained on duty with the British and Irish Lions.

Bowe is having exploratory surgery on Wednesday to determine the extent of ligament damage affecting the wrist he broke on tour in Australia in June.

Bowe was scheduled to return in a Pro12 match against Ospreys on 4 October.

However if the ligaments are badly damaged the 29-year-old could be out for 12 weeks, Ulster confirmed.

The Ireland wing's Lions tour appeared to be over when he broke his wrist during the 22-12 victory over Queensland Reds on 8 June, but he went on to play against the Wallabies in the second and third tests.

He was expected to miss the early rounds of the Pro12 but further complications to his wrist injury means he is now in danger of being ruled out of the Heineken Cup pool matches against Leicester Tigers and Montpellier in October.