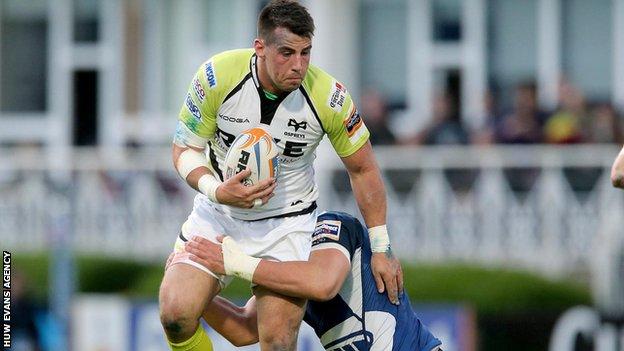 Hooker Scott Baldwin has signed a new long-term contract to keep him at the Ospreys until the summer of 2017.

Baldwin, 25, has been at the Liberty Stadium since January 2009 and played for Wales on the recent summer tour to Japan.

The former Bridgend hooker came off the bench for the Ospreys during their Pro12 final win against Leinster in Dublin in 2012.

"The Ospreys have been really great to me since I came on board four years ago and I've really developed," said Baldwin.

"Last season was a big jump forward for me, being involved regularly week in, week out, and I'm happy that everything is sorted so that I can look forward to the new season and beyond that, working with a great bunch of boys in the team and great coaching staff.

"The good thing about the Ospreys is the way they bring players through each year, not just youngsters but boys from the Premiership who haven't been part of the age-grade set-up.

"It shows that there is talent beyond the age of 20 or 21 and if you work hard then the Ospreys will give you a chance. I was lucky enough to get an opportunity and I hope I've been able to make the most of it."

Baldwin became a regular in the Ospreys side in the Pro12 and Heineken Cup, making 23 appearances, during the 2012/13 season.

He has been an Osprey since January 2009 when his form in the Welsh Premiership with hometown club Bridgend was rewarded with a first regional contract. He made his Ospreys debut two months later, coming off the bench against Leinster at the Liberty Stadium.

He enjoyed a loan spell with the Ospreys partner club in Italy, ASR Milano, before he returned to Wales at the start of 2012 and was involved in the end of season run-in to a fourth league title.