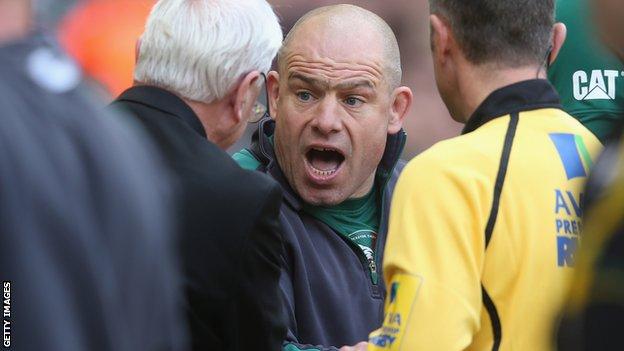 Leicester Tigers chief executive Simon Cohen says there will be further action against the verdict to suspend director of rugby Richard Cockerill for nine matches.

Cockerill was banned because of his behaviour during the the 37-17 Premiership final win over Northampton.

The club failed to reduce the suspension at a Rugby Football Union disciplinary hearing in July.

"There will still be some fall-out," Cohen told BBC Radio Leicester.

"Most of our angst was about the processes in the first hearing, but the judgement in the second hearing didn't do a lot to eradicate those concerns."

Cohen hit out at the timing of the punishment, which was brought forward to 24 August to include their pre-season match against Championship side Jersey but not their first warm-up fixture in Geneva.

"The conclusion they came to was frankly absurd, that Montpellier was not a meaningful fixture and Jersey was," he said.

"There is no rhyme nor reason in that whatsoever."