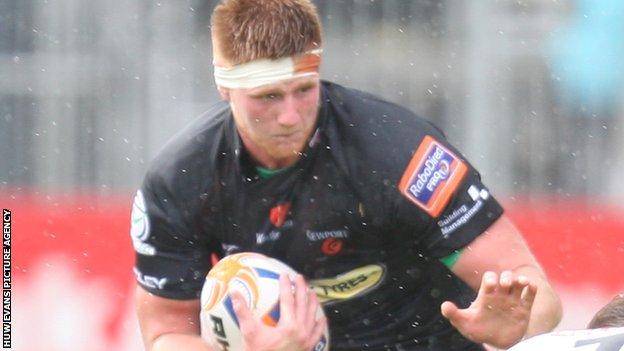 Coombs, who won four caps during Wales' 2013-14 season, has taken over as skipper from Lewis Evans.

"It's obviously one of the biggest achievements that I have had and I am very proud to be captain here at the Dragons," he said.

Coombs, 28, signed a three-year contract extension in May, keeping him at the region until May 2017.

"I have always felt that I have tried my best to lead whether I am skipper or not.

"I couldn't be in a better place with the support around me. It's not a daunting thing it's something that I will embrace and will enjoy doing. As I said I try to lead by example anyway."

Keeping Coombs at Rodney Parade is another boost for the Dragons after British and Irish Lions star Toby Faletau committed himself to the region until 2016.

"I am delighted that Andrew has accepted to captain the Gwent Dragons for the 2013-14 season," said Jones.

"He's really excelled since his first stint at the Newport Gwent Dragons several years back and he has deservedly represented Wales.

"He has also shown great example in our pre season training.

"I think it was important to take my time to clearly identify who would be the right choice to lead us and Andrew has stood out as a natural leader in this environment."

Coombs came up through Newport RFC youth teams to play for Pontypool at senior level.

He rejoined Newport RFC making his senior debut against Ebbw Vale in 2006 and then went on to become captain in the 2008-2009 season.

Coombs made his Wales debut against Ireland at the star of the 2013 Six Nations Championship campaign.