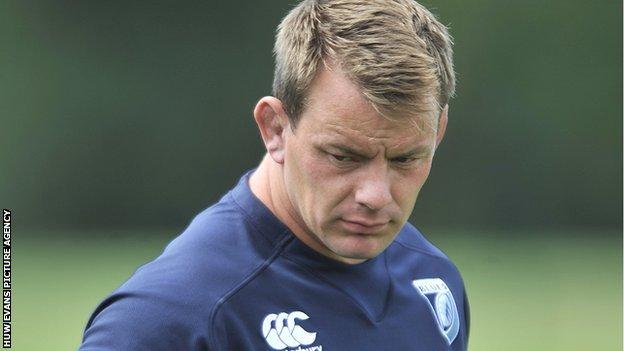 Rees, capped 58 times by Wales, takes over from back-rower Andries Pretorius having ahead of the new season.

Another former Scarlet, centre Gavin Evans, will be vice captain.

Blues director of rugby Phil Davies said of 32-year-old Rees: "[He] understands the standards that I expect of the squad."

The 2009 British and Irish Lions tourist to South Africa will have leadership support from Evans and a group titled the Regional Leadership Team.

Ex-Scarlets boss Davies added: "We have picked a core group of players to head up our Regional Leadership Team with Matthew Rees appointed as captain."

"Any of the players can step up and they have been given specific areas to work on.

"Matthew will face stiff competition for his starting place with Rhys Williams, Marc Breeze and Kristian Dacey all performing well for us last year.

"However, he is a player that understands the standards that I expect of the squad.

"We selected the captain a bit differently last year, but this year I know a bit more about the players so it made things easier.

"I have known Matthew for a long time and he is a great leader.

"I canvassed opinion from all around regarding the appointment and it was greeted with enthusiasm.

"He obviously has a lot of experience at regional and international level, but what I like about him also is his hunger to do well.

"He's made the move from the Scarlets to the Blues this summer and still has the hunger for the game and to play international rugby."

Rees was part of the all-Welsh front row along with fellow Blue Gethin Jenkins and Adam Jones, for the three British and Irish Lions Tests against South Africa in June 2009.

He has previously played for Treorchy, Pontypridd and the defunct Celtic Warriors and he became Wales captain in November 2010 against Australia.