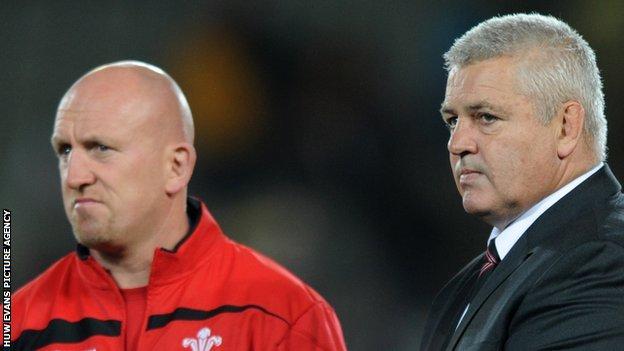 Warren Gatland does not expect there to be any issues with Wales defence coach Shaun Edwards when the British and Irish Lions boss resumes his full-time role as coach of the Welsh side.

Gatland from his staff for the tour of Australia, which the Lions won 2-1.

"I'm looking forward to working with him again in November."

Gatland also believes his Lions-packed Wales squad can "be positive" about their prospects.

Those successes came with Edwards' defensive strategy to the fore, but the former rugby league star was overlooked in favour of England's Andy Farrell for that role with the Lions.

Gatland insisted "Shaun's someone I've got a huge amount of time for and admire", but he added that the Lions tour was "a good experience to see how other people operate".

The Lions boss continued: "It doesn't mean I have any less respect or admiration for Shaun as a coach and I think a lot of the players that were on the Lions will come back and look forward to working with him again as well."

Gatland is now focused on ensuring Wales do not suffer a post-Lions slump and he said the fact the squad contains many young players who can expect to be involved in both the 2015 and 2019 World Cups is grounds for real optimism.

But Gatland said: "Apart from those players [Jones, Jenkins and Phillips], everyone else is in their early to mid-20s and have not got just one World Cup ahead of them, but possibly two.

"And a lot of those players who performed well for the Lions [are part of that].

"We've still got to develop some depth and that's important - when we pick up two or three injuries we're vulnerable, like everyone else.

"But we can look ahead and be positive and really excited about the next few years - we could do really well in the next World Cup."