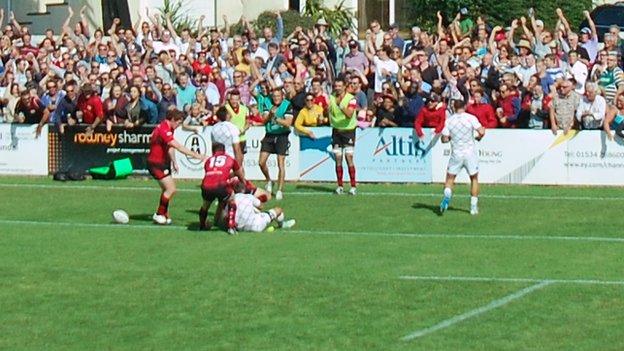 Premiership champions Leicester showed their class as they cruised to a comfortable victory over Championship side Jersey in a pre-season friendly.

The Tigers scored four tries to Jersey's one in a competitive first half which ended 22-7 to the visitors.

But a strong Leicester side - including some of the club's Lions tourists - crossed seven times after the break.

We relish the opportunity and I thought for 25 minutes we did very well.

Leicester's fitness told as Jersey, who have only recently turned full-time, got a lesson in professional rugby.

Hollywood actor Henry Cavill - best known for playing Superman - was back home in Jersey watching the game; by the end of the second half the hosts could have done with the superhero on the pitch as the Tigers ran riot.

Nevertheless, Jersey director of rugby Ben Harvey, who has set his side the target of reaching the Premiership in the next five years, said there was a lot to take away from the game.

"We relish the opportunity and I thought for 25 minutes we did very well," he told BBC Radio Jersey.

"In patches we didn't keep the ball very well and looked ragged defensively in the second half.

"In the first half we constructed a very good try and had we delivered the ball better from set-piece we could have put them under more pressure."

Tigers director of rugby Richard Cockerill started his nine-game suspension and watched on from the crowd, leaving coach Paul Burke in charge from the sidelines.

"I am overwhelmed," said Burke.

"The boys have trained really hard, and to come out and score 11 tries and for the guys to get valuable game time under their belt was fantastic for us all."

The sides met in pre-season last year as well, with Tigers winning 34-21 in a far closer contest than many had predicted.