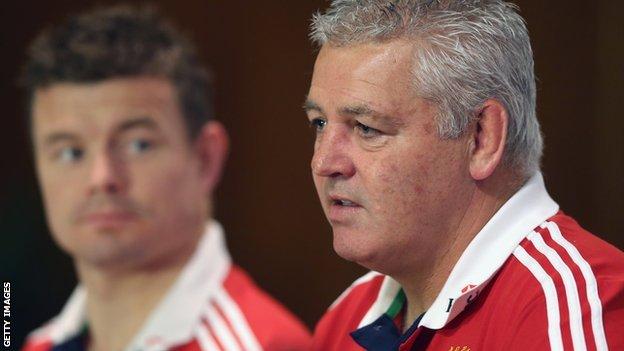 Former British and Irish Lions hooker Keith Wood has stood by his criticism of Warren Gatland's handling of the team in Australia.

Wood called Gatland's decision to drop former Lions captain Brian O'Driscoll for the third Test against the Wallabies in July "a terrible mistake".

But asked if he regretted the strength of his Gatland criticism, Wood replied: "I don't, no."

O'Driscoll, 34, was widely expected to be named captain after Wales flanker Sam Warburton tore a hamstring during the second Test in Melbourne on 29 June. Instead, Gatland omitted him from the squad.

Fellow former Ireland international Willie John McBride - who captained the victorious 1974 Lions tour to South Africa - also questioned the selection made by Gatland, who picked 10 Welshmen in his starting line-up in Sydney.

The New Zealander has returned to his job as Wales coach following the Lions tour.

Wood accepted the Lions produced a memorable display in the third Test, but felt such a performance could have been delivered in the opening two encounters against the Wallabies - and still believes that leaving out O'Driscoll was a mistake.

He said: "I was glad to see the Lions win at the end, absolutely.

"And I thought it could have been a bit more exciting.

"I thought there could have been a bit more flair, a bit more of a blend of the four teams.

"Someone asked me earlier on: 'Was he [Gatland] vindicated?' I think [he was] vindicated to the point that Lions won a Test series.

"But in some way I think the Lions lost a little bit in the summer because I didn't think it was a blend of four teams."

Wood - who played for Gatland when the New Zealander coached Ireland between 1998 and 2001 - says he has "not even vaguely" criticised the selection of 15 Welsh players for the tour.

"I've never said there were too many Welsh players on the team. That wasn't the point," said Wood.

And he says O'Driscoll came out of the controversy "fantastically well".

Wood added: "My view still is that the best option was to have him on the squad as a leader, as everything else in it.

"The fact that he wasn't needed on the day doesn't actually change that view.

"It's fantastic [that we won] and we did need to win and I argue against myself a little bit in relation to that."

Wood believes that Wales will go into the 2014 Six Nations as "overwhelming favourites", having won the 2013 tournament, then provided the bulk of the Lions tour party.

He added: "It's up to everybody else to continue telling them that and to see if they can knock them [Wales] off the perch a bit."

But he says England's 2003 World Cup winning coach Sir Clive Woodward tipping Wales as winners of the 2015 tournament in England is "a tad premature".

"There's plenty of rugby to be played before then," said Wood.