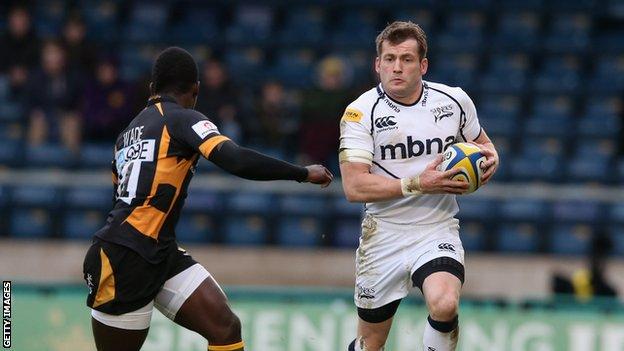 Sale winger Mark Cueto says he thought of retiring at the end of last season after a long battle with a knee injury.

But not only is he now relishing the new season, the former England winger, who had said the new campaign would be his last, may even extend his stay beyond the 2013-14 season.

I feel as good as I have for a long time

"I'm so happy I've got this extra year," he told BBC Radio Manchester.

"If my contract had been up at the end of last season, I'd have knocked it on the head," added the 33-year-old.

Cueto, who was between 2004 and 2011, continued: "If the season goes well, my body feels good and I feel I can contribute at the right level, I'll potentially look at another year."

Both Cueto, who was famously denied a try in the 2007 World Cup final, and Sale struggled last season, with the Salford-based club requiring a late run of good results to avoid relegation.

"I remember this time last year and I couldn't kneel on the ground for my [pre-season] photo because my knee was that sore," revealed Cueto, who is the Premiership's all-time leading try scorer with 78.

"I carried it all last season and, because you're turning out week-in and week-out, people don't realise where you're at."

International commitments, followed by his troublesome knee, had prevented Cueto from participating in a full pre-season schedule for several years until this summer, but an extended rest has helped him return to full fitness.

"We had six weeks off and that's probably the longest rest I've been able to give my body since I started," he said.

"Then I've done eight or nine weeks of pre-season, which has been brilliant. I feel as good as I have for a long time."

Cueto, who made his debut for Sale in 2001 and is about to begin his 13th season with the Sharks, after passing the mark set by former team-mate Steve Hanley.

Sale endured a but recovered under the stewardship of Steve Diamond, their third director of rugby of the season after Bryan Redpath and John Mitchell, to finish 10th in the final Premiership table and well clear of relegated London Welsh.