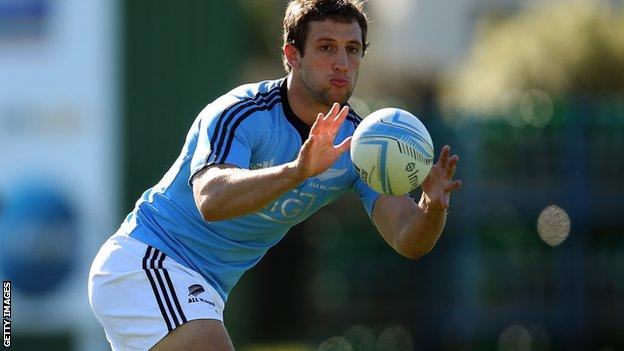 New Zealand will give a Test debut to Crusaders' Tom Taylor at fly-half in Saturday's second Rugby Championship Test against Australia in Wellington.

Uncapped Taylor, 24, has been selected by All Blacks coach Steve Hansen ahead of the more experienced Colin Slade.

"He is mentally tough and plays the game with a lot of confidence and maturity," Hansen said.

"These factors, along with his assured goal-kicking under pressure, have made this an easy selection.

"We have every faith that he will handle the occasion with aplomb."

Taylor, son of 1987 World Cup-winning centre Warwick Taylor, played at inside centre or full-back for the Crusaders in this year's Super 15 competition.

Slade, a member of the 2011 World Cup-winning squad, is on the bench for Saturday's clash, in which prop Tony Woodcock will become the fourth All Black to win 100 Test caps, following Richie McCaw (117), Keven Mealamu (105) and Mils Muliaina (100).

New Zealand beat Australia 47-29 in the opening match of the Rugby Championship in Sydney but Hansen is expecting a backlash from the Wallabies after they were outscored six tries to two.

"They will be hurting after that Test and will throw everything at us," he said.

"They will be looking to play with more accuracy and intensity so, therefore, we will need to meet that with a higher level of execution right across the board if we are to be successful."