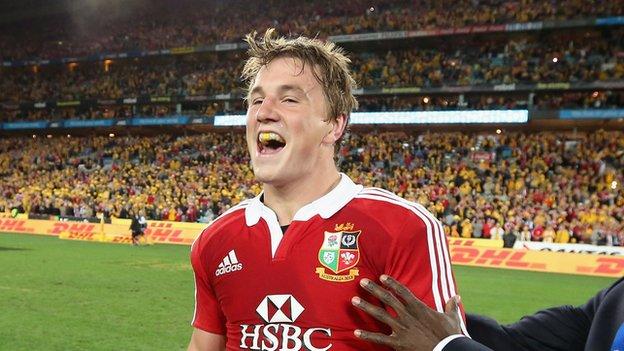 Former Lions hooker Keith Wood criticised Gatland's handling of the team in Australia and the dropping of Brian O'Driscoll for the third Test.

Davies played in all three Tests in the 2-1 series win over Australia.

Without the Ireland centre, the Lions and the series 2-1.

Asked if he regretted the strength of his criticism, Wood said: "I don't, no."

Davies, who partnered fellow Wales centre Jamie Roberts in the Lions midfield, wore the number 13 jersey usually reserved for O'Driscoll in the first and second Tests against the Wallabies.

The new Scarlets joint-captain, who is out of contract at Parc y Scarlets in the summer, respects Wood's opinion but believes Gatland's approach delivered a first Lions Test series win for 16 years.

"It is his [Wood's] own opinion and that is what he thinks," said Davies.

"But it's a results-based game and we won the series - and that was the most important thing.

"The team won the game. It doesn't bother me and I am getting back to work now and I will just concentrate on myself."

Davies, 25, was one of 10 Welshman selected by Gatland in the Lions side which recorded the win in Sydney.

O'Driscoll, 34, was widely expected to be named captain after Wales flanker Sam Warburton tore a hamstring during the second Test in Melbourne on 29 June, but instead Gatland dropped the Ireland great from the squad.

Wood, who played on two Lions tours, to South Africa in 1997 and Australia in 2001, as well as winning 58 Ireland caps between 1994 and 2003, said ahead of the third Test that Gatland's decision had left him "totally at a loss".

Wood said: "I was glad to see the Lions win at the end, absolutely, and I thought it could have been a bit more exciting.

"I thought there could have been a bit more flair, a bit more of a blend of the four teams.

"Someone asked me earlier on: 'Was he [Gatland] vindicated?' I think [he was] vindicated to the point that the Lions won a Test series."

"But in some way I think the Lions lost a little bit in the summer because I didn't think it was a blend of four teams."