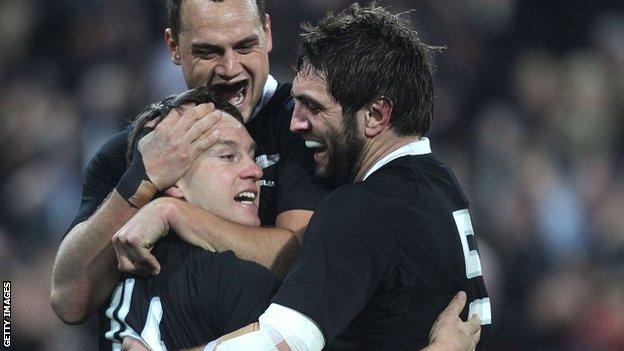 New Zealand retained the Bledisloe Cup and maintained their 100% start to the Rugby Championship with a second consecutive victory over Australia.

Two more tries from Ben Smith, who scored a hat-trick last week, saw the All Blacks take a 15-6 half-time lead.

Australia had led 6-0 after a strong start, and Christian Leali'ifano's third penalty cut the gap to 18-9.

The Wallaby winger, who made a stunning Test debut against the British and Irish Lions in June, intercepted Ma'a Nonu's pass and streaked away to score his third Test try with eight minutes left.

But that was little consolation to a well-beaten Australia side, whose winless run in New Zealand now extends to 15 matches stretching back to 2001.

They led through an early Leali'ifano penalty and, after Folau's try-saving tackle on Julian Savea in the corner, threatened to stamp their authority on the match.

But after Leali'ifano cut through and the All Blacks cynically infringed close to their own line to restrict the damage to a second penalty, New Zealand took control.

Superb handling from Savea, Dagg and flanker Steven Luatua put Smith over for his opening try in the right corner after 27 minutes, Taylor's conversion putting the world champions into the lead.

After the fly-half's penalty made it 10-6, Nonu's burst allowed Dagg to put Smith over for his seventh try in his last four Tests with the last move of the first half.

The sides will meet for a third time, in a game not part of the Rugby Championship, in Dunedin on 19 October but New Zealand already have the Bledisloe Cup - the trophy the trans-Tasman rivals contest every year - in their cabinet for the 11th season in a row.

South Africa thrashed the Pumas 73-13 in Johannesburg a week ago to set a new record winning margin for the competition.

But their second encounter in Mendoza was a much tighter affair. Juan Manuel Leguizamon and Marcelo Bosch went over for Argentina with Felipe Contepomi adding a penalty to his two conversions.

Bjorn Basson scored the visitors' only try with Steyn's boot providing the other 17 points.