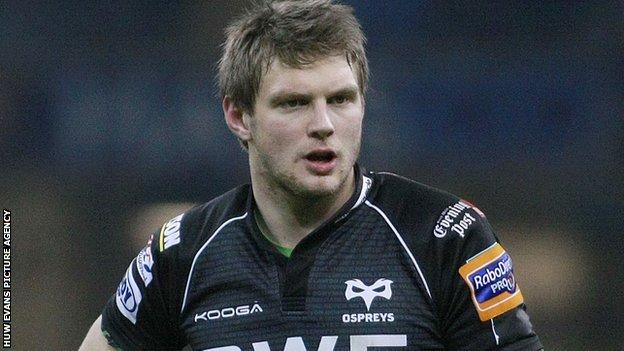 Wales fly-half Dan Biggar says the Ospreys will settle for nothing less than a RaboDirect Pro12 play-off place this season.

The region finished fifth at the end of the 2012-13 season, just missing out on the play-offs.

Biggar hopes that the Ospreys' four successful British & Irish Lions, including Alun Wyn Jones and Adam Jones, can help the cause.

"Our aim is to be challenging to get into the play-offs," insisted Biggar.

"We can't be accepting fifth or sixth place. We have to be pushing for fourth place and that's the end of it."

We can't be accepting fifth or sixth place. We have to be pushing for fourth place and that's the end of it

The Ospreys have a tough opening to their Pro12 campaign with away fixtures at Benetton Treviso (7 September) and Leinster (14 September) before a home clash against Edinburgh.

"It's a tough start. We didn't do ourselves any favours last year by having two home starts and losing them," reflected Biggar.

"We have to win the first game on the road. As tough as it will be, it is imperative we win our first game.

"This club is about winning trophies - it's what we have done in the last seven/eight years in terms of four [Celtic League] titles.

"We are under no illusions how hard this season is going to be with everything that's going on and potentially losing players."

Biggar was instrumental in helping Wales to the 2013 Six Nations Championship, but is taking nothing for granted this season.

He was the only player in the Wales starting line-up in the win against England in March not to get a Lions call-up.

Instead of travelling to Australia, he was part of the Wales team that drew 1-1 in a series with Japan.

Biggar is hoping that if he shows good form for the Ospreys he will be back in contention for the Wales number 10 jersey as he battles with a fit-again Scarlets outside-half Rhys Priestland.

"It's important you have to play well for your region to deserve a national call-up. Last season was great internationally for me," said Biggar.

On the return of the Lions, Biggar said: "I think people like Alun Wyn Jones and everyone coming back has given the club a huge boost. It's important we get those boys back as quickly as we can.

"Those are our star players and those are the guys who are going to make a difference in the Heineken Cup games or the important Rabo Pro12 games.