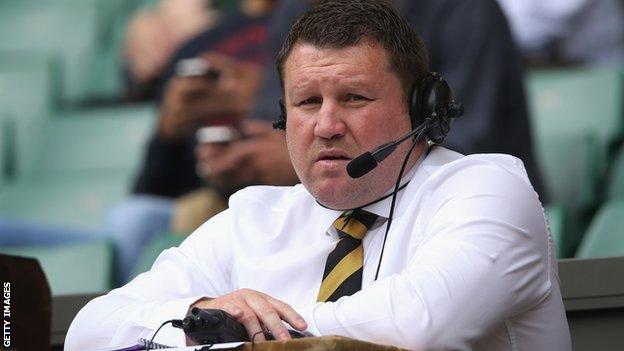 Wasps boss Dai Young has said the squad have benefitted from being brought back for pre-season training early.

Young's side had four weeks off in the summer, instead of the usual five after finishing eighth in the Premiership.

"It's not a drastic change. But at the end of the day we didn't achieve anything last season," the director of rugby told BBC Sport.

"If you achieve something you tend to have less time off, which doesn't make sense to me."

Wasps were praised for their use of youngsters last season, but finished 17 points adrift of the play-offs and were 11 points away from a Heineken Cup berth.

That followed the previous season's narrow escape from relegation by one point and meant the six-times English champions have not secured a top-four finish since 2007-08.

"We didn't achieve things, so we felt we needed to work on things.

"We brought them back a week earlier and we felt like we benefitted from it," said Welshman Young, speaking at the Premiership's launch event at Twickenham, where Wasps start their campaign against Harlequins on 7 September in the London Double Header.

"It's given us extra time to work on conditioning, stuff up front, our defensive play and continue to improve on our strength which is our attacking game."

New captain Chris Bell agreed with his coach, saying: "We fell away a bit towards the end of last season.

"We started a touch earlier than we would normally to work on our fitness and it's paid dividends in our pre-season games so far."