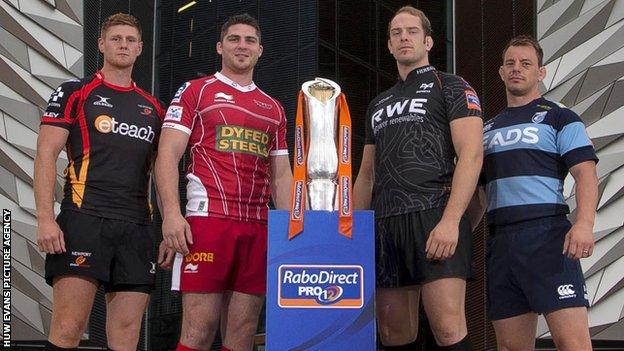 With the British and Irish Lions' triumph in Australia now just a memory, attention turns to the new season and the start of the Pro12 campaign on Friday.

Last season only the Scarlets reached the play-offs, at the expense of the previous year's champions, the Ospreys. The Scarlets take on last season's champions Leinster this Friday.

Ospreys had five players on the Lions tour and they will hope that success will rub off as they target a fifth title.

Scarlets' play-off loss to Ulster was George's North's final appearance for the region before leaving for Northampton, while Wales team-mate Jamie Roberts departed the Blues for Racing Metro in Paris, as Welsh rugby tries to combat more lucrative offers elsewhere.

The Blues struggled during Phil Davies' first season in charge but have added the experience of the returning Gethin Jenkins and Mathew Rees to their squad.

The Dragons were once again the lowest-placed of the Welsh regions in last season's Pro12, finishing second from bottom, but now have the charismatic Lyn Jones in charge of coaching.

The Blues will be hoping the grass is greener this season, after a forgettable 2012-13 campaign that saw them finish ninth.

And there's reason for optimism on that front, with the Blues having installed a brand new artiifical pitch. The new surface will spell an end to the old-fashioned mudbaths that became synonymous with the Arms Park, and in theory, give way to a faster, more high-tempo brand of rugby.

They scored five tries in their recent pre-season victory over Sale. Last season, they managed only 28 all season - the lowest tally in the entire league.

Sam Warburton and Leigh Halfpenny - the Lions captain and man-of-the-series, are both on the books at the Arms Park.

The presence of two global rugby superstars is any marketing person's dream. But their exploits in Australia will have doubled their value, and with their contracts coming to an end this season, Welsh rugby's funding model will come under closer scrutiny than ever before.

While the Blues have seized the initiative on the pitch, the Dragons are undergoing something of a revolution off it.

Former Ospreys and London Welsh head coach Lyn Jones has arrived at Rodney Parade. And former Wales and Lions fly-half Gareth Davies has signed on as the region's chief executive.

His contacts in both the business and rugby worlds could kick-start the Gwent region's ambitions, and potentially rouse the sleeping giant of Welsh rugby.

And talking of giants, the retention of Toby Faletau is a massive fillip for the club. One of world rugby's hottest properties, even the most optimistic Dragons fan would have been resigned to his departure, especially following his exploits with the Lions.

But despite the lure of big bucks in France or England, the powerhouse Number 8 has chosen to remain. Either Faletau is rooted strongly to the Gwent Valleys of his upbringing, or the Dragons board has miraculous powers of persuasion.

The Scarlets were the most successful Welsh region in last year's tournament, making it through to the play-offs despite a humiliating home defeat to Treviso in the last game of the regular season.

They're desperate to go one step further, but will be missing the firepower of George North and Andy Fenby, who between them scored nearly half of the Scarlets' tries last season.

But while one Lion has left, another has remained, with Jonathan Davies being elevated to the position of joint-captain. Davies was a standout player on the Lions tour, and his influence will be vital among his younger colleagues.

Co-captain Rob McCusker finds himself - at 27 - the third oldest member of the squad. The Scarlets have always prided themselves on their academy, and they'll be relying on it more than ever this year, with John Barclay the only notable signing to offset the big name departures.

Although talk of a Welsh exodus continues to undermine a revival at regional level, Ospreys fans can revel in the fact that their first choice pack contains six British and Irish Lions.

Of the six, Adam Jones, Alun Wyn Jones, and Ian Evans are all out of contract at the end of this season, so a priority in the boardroom will be to keep them at the Liberty.

But their presence this season means the Ospreys will again have a pack to fear. The biggest challenge for new forwards coach, Chris Gibbes, will be to stamp his authority on the grizzled group, who between them have won three Grand Slams, four Pro12 titles, and a Six Nations Championship.

Last season, they lacked firepower out wide and a number of injuries in the backs saw them on one occasion fielding four scrum-halves in their three quarter line. Eli Walker is back now - and the sight of him carving up defences last season led some to tout him as an outside contender for the Lions.

This may be his season to shine. They'll miss the sniping, authoritative presence of Kahn Fotuali'I, but they have an impressive pool of talent at fly-half. In Dan Biggar they have the incumbent Wales stand-off.

Beneath him, the diminutive but threatening Matthew Morgan. And they can also call on the services of the IRB Junior World Player of the Year - Sam Davies, an assured number 10 who helped guide Wales to the final of the Junior World Cup in the summer.

A strong start will be a priority for the Ospreys. Their run of three straight defeats in the opening rounds last season put them on the back foot, and they never recovered.