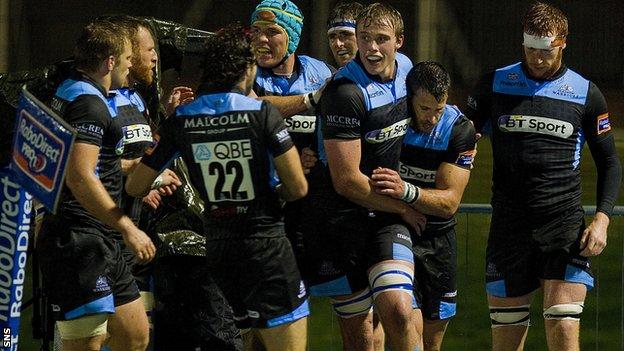 Glasgow Warriors added to their burgeoning home reputation with a narrow victory over Cardiff Blues at a near-capacity Scotstoun Stadium.

It took a series of penalties to keep the scoreboard moving in a scrappy RaboDirect Pro12 match characterised by handling errors in the rain.

Cardiff recovered from a 12-6 half-time deficit to move ahead thanks to the boot of stand-off Rhys Patchell.

For coach Gregor Townsend and his team, they are now unbeaten in their last eight home matches, a record they will seek to embellish if they are to once again reach the play-offs.

Scott Wight and Patchell traded early penalties for infringements in central positions and the 20-year-old Welsh talent kicked the visitors ahead with a penalty from distance.

Incessant rain, mixed with season-opening jitters, produced a series of clumsy attempts to gather the ball and neither side was in full flow in the opening half.

Warriors pulled themselves level when referee Dudley Phillips penalised tight-head prop Scott Andrews in the second scrum of the match and right centre Mark Bennett arrowed the penalty through the sticks from the halfway line.

Injuries forced Townsend to replace Byron McGuigan and skipper Al Kellock with Seymour and Jonny Gray respectively midway through the first half, a very early indication that he will need the full range of a squad boosted in recent months by Tyrone Holmes, Jerry Yanuyanutawa, Gabriel Ascarate, Leone Nakarawa, Richie Vernon, Kevin Bryce and Fraser Brown.

While the near-capacity crowd in Glasgow's west end craved a try, they had to settle for sound defensive displays, most notably from the Blues, until towards the end of the half Glasgow finally began to pierce the white line with sporadic breaks.

Lamont and Chris Fusaro made interceptions and 20-yard surges to threaten Cardiff and, when outside centre Owen Williams was sin-binned for a trip, Wight made his punishment more severe when he scored the resultant penalty.

Wight screwed a penalty wide before Bennett scored his second of the half with a confident kick from 35m to cement a 12-6 half-time lead.

Blues seized on a variety of fouls, Patchell scoring two out of three penalties in the first 15 minutes of the second half to draw level, with his third from 55m drifting wide.

At this point the Welsh side had the momentum, stringing passes together while Glasgow's play was beset with slack passes and buttery fingers.

Bennett rammed a 43m penalty a fraction wide after Cardiff had failed to roll away from the ball and the impressive Patchell drop-kicked from 20m to give his team the lead.

Seymour ran in the only try of the match in the right-hand corner and Jackson, a second-half sub, made it 19-15 with the conversion from a narrow angle.

Jackson slotted home the simplest of penalties for a seven-point advantage and had five minutes to hold out against 14 men, with Macauley Cook sin-binned.

But Cardiff were desperately unlucky not to score a try of their own.

They took a quick tap at a penalty, Bradley Davies put his head down and made three metres and scrum-half Lloyd Williams crossed the line at the same time as a clutch of Warriors.

The TMO decided there was no touch-down, Richie Vernon was sin-binned for not retreating at the preceding penalty and Glasgow eventually cleared the danger to scrape home.

Cardiff Blues lost both fixtures to Glasgow last season in a disappointing campaign. Friday's defeat continues that pattern but with the teams in the same Heineken Cup group there are ample opportunities for revenge.